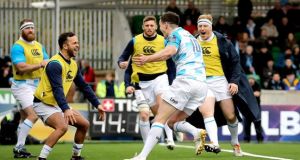 Leonardo Sarto shouldn’t have got the man’s blood up. Don’t people know by now, if they are going to cheap shot Johnny Sexton they need to clean him out, and accept the red card that follows, otherwise he will snatch the game clean from them.

Glasgow, an attacking force in the Pro 14, are not yet built for European sustainability.

Leinster’s homework was straight forward enough. Once the maul was cranked up a bonus point victory on the road always looked achievable.

This they did, expertly.

The fourth try came, via a swerving Noel Reid, not long after Sexton drove the knife into Glasgow’s Champions Cup plans.

Having secured the victory, by making it 27-18, he took leave well before the third act was over.

The Leinster pack, led by man of the match Rhys Ruddock, have now set up a mouth-watering home and away duel with the equally physical Exeter in December.

The 2012 champions are well on their way.

This job was halfway done by the turn. Cian Healy shrugged off an early knock to rumble over for two tries. It was some announcement by a man who recently clocked up 30 years. Jack McGrath’s response is coming. Dave Kilcoyne cannot do much more for Munster. Irish loosehead stocks are brimful again.

Sexton had the usual experience. Sarto, the rangy Italian winger, was the latest to leave the shoulder in to little avail. There were words.

The touch judge shrugged his shoulders. A dark intent came over him.

He had Leinster up and running with a penalty after two minutes.

Cue the first of too few Stuart Hogg cameos (in fairness, it’s the dazzling attacker’s first run since Conor Murray’s elbow broke his face last summer). A Hogg shimmy left Robbie Henshaw floundering and while Reid scrambled to put the Scottish fullback to ground, Jerome Garces spotted the Leinster line - in their chequered away gear - creep offside. Finn Russell made it three-all.

Then came a magic trick. Russell seemed certain to launch Hogg at the gainline but instead the outhalf took a loop return pass and grubbered down the tramline. Panic stations. But it was too late. Tommy Seymour shinned the ball infield where Hogg continued his gallop with a deft placement leaving Scotstoun in raptures.

That was as good as Glasgow got. They were not helped by losing Ryan Wilson for 14 minutes due to a blood injury that required heavy strapping on his knee. Wilson returned just as Healy was being driven over for his first try. This was born from messy kicking by Sexton and Hogg. Sexton missed touch but Hogg’s siege gun response went dead to give Leinster a scrum eight metres from the try line. It took another lineout drive and big carry by Jack Conan before Healy touched down.

Twice Wilson tried to find equilibrium, twice he wobbled, prompting the loud speaker to announce his replacement before he could protest.

Swinson passed his HIA and returned.

Hogg had a 50-metre penalty to settle Glasgow nerves but it went wide.

Leinster were in their rhythm. Healy’s mauled try saw them disappear with a 17-10 lead after Sexton duffed the conversion over the bar.

Sexton’s dominance was clear when he looped and strolled under the posts early in the second half. The delicate link coming from new father Scott Fardy.

Glasgow did not fold right away. Their lightning hands found Seymour for another wide out try. Russell missed the conversion, just as Leo Cullen made his first raise of the day. In came James Tracy, McGrath and the fit against Dan Leavy as Healy, Josh van der Flier and Cronin departed.

As a direct result Sam Johnson got a chance to change the course of this contest. The centre brushed past Sexton and raced out of his 22 but the Ireland outhalf, with complete disregard for his hamstrings, hunted him down. Atonement came with a perfectly timed hit resulting in Johnson passing into thin air.

Unsurprisingly, the medics were over a few minutes later, and while Sexton walked away Ross Byrne had already stripped off on the touch line.

It became a one score game when Garces punished Leavy for barreling through a ruck.

No way Sexton was leaving. Byrne was handed a winter coat to keep warm.

Sure enough another loop yielded three points when Peter Horne was caught, by the TMO, tackling Sexton off the ball.

The 7,000-plus Glasgow faithful roundly applauded the Lions legend as he finally made way for Byrne with Tadhg Furlong also relieved by Michael Bent.

The Warriors seemed to run out of fight. That ensured the bonus point came easier than it ever should with Reid latching onto Joey Carbery’s switch pass