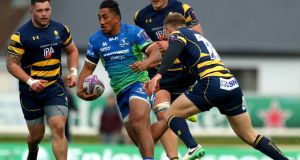 Connacht flattered to deceive in their victory over Worcester Warriors. Although ultimately grabbing control of Pool five in the European Challenge Cup, they made hard work of this victory at the Galway Sportsground – albeit in difficult weather conditions.

Having scored a superb try in the eighth minute with the wind at their backs, they failed to kick on in that opening half, making hard work of the breakdown and kicking for advantage. Yet they managed to produce a more measured second half to see off the Warriors. The only negative in the result was the concession of a bonus point which also keeps the English premiership outfit in contention.

“Pretty happy about the win, wouldn’t call it a good performance,” says coach Kieran Keane. “Probably would have been tragic if we’d lost it, but I thought it was a slip back to be honest – back to old habits.

“It is always better to be circumspect and take a deep breath, but I was a bit disappointed about our level today – I thought we were bit average compared to what been in the last couple of weeks. We made some changes and that was largely to freshen up the squad, create competition and give people opportunities, but not everyone is taking them.”

A solid scrum provided the platform for the first score after eight minutes. Captain for the first time, number eight Eoghan Masterson took control at the base before opting to go wide. When fullback Tiernan O’Halloran made a superb break up the right wing, Darragh Leader did well to keep the momentum going, before off-loading to the supporting Masterson who crashed over. Although Jack Carty missed the conversion, he added a penalty after 20 minutes to push Connacht into a an 8-0 lead.

Connacht continued to enjoy control both in territory and possession, but they were unable to make it count on the scoreboard despite creating chances. It gave Worcester more hope as they created one solid opportunity near the end of the half, with big David Denton providing the momentum under the watchful eye of Scottish forwards coach Dan McFarland.

Although the 8-0 lead at half-time hardly seemed enough in the conditions, Connacht held firm until the 51st minute when the visitors lapped up a loose ball, number eight GJ van Velze took advantage, Pennell surged through a gap, and Josh Adams finished in the left corner, with outhalf Jono Lance unable to convert.

Connacht, however, wrested control back, and a chip through from Jack Carty bounced perfectly for an oncoming Matt Healy, who scored his third try in two games. Carty added the conversion to extend the lead to 15-5. Worcester, however, grabbed the initiative seven minutes from full time, settling for a penalty which Lance converted to nab the bonus point.

“We tried to lift the tempo, that was the ambition, because we didn’t think they would live with us in terms of fitness levels – they are much bigger and heavier pack, and shifting them around was always the plan. I just think we lacked a little bit of composure and our skill set wasn’t great. It was a pretty tough day weather wise, so yeah, not making excuses, but I thought we would have been better,” Keane adds.

“We have used the European break to our advantage and the boys are in a good space downstairs to come away with two wins and I applaud them for that. It would have been horrendous if we had dropped either of those two games – so yes, light at the end of the tunnel.”

But in a turn to Pro14 action with Munster and the Cheetahs next up at the Sportsground, Keane says his squad needs to improve.

“I think we are going to have to lift our standards to live with Munster, it’s a big derby, and then the Cheetahs – two quality sides.”

Captain John Muldoon will be back to lead the side having been rested against Worcester.

“We wanted Mul to be bang on for Munster, so we gave Masterson the baton, and he has done a really fine job all week, a great guy and team man, a natural leader, he deserved it,” says Keane.