Connacht fail to hold on to first-half lead against Glasgow 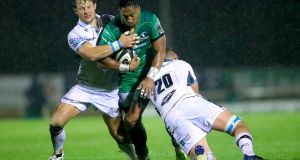 On the opening day of the Pro14 in the battle of the two former Chiefs coaching team, Dave Rennie’s Glasgow prevailed with greater efficiency over Kieran Keane’s Connacht at the Galway Sportsground.

Scoring two tries to one reflected Glasgow’s superiority, and Rennie’s former assistant Keane did not mince his words .

“We probably got what we deserved,” said Keane. “Two tries in itself by the opposition to our kicking goals was possibly a fair indication of where we were.

“We didn’t handle the wind very well, didn’t play that smart, and lacked a bit of direction in that first half. In the second half, we spilled a lot of ball, and coughed up a lot of opportunities that might have existed. Little things cost us on the night.

“One played far superior rugby to the other in terms of handling and the way they handled the conditions. They played a fair bit smarter and they got good rewards and a couple of soft tries.”

Although the scoreline was considerably closer than last year’s corresponding 41-5 defeat, it was a still a tough night for Connacht who led 9-3 at half-time.

“It was a pretty dirty night. We will have to pick the boys up again, they have been really good throughout pre season, a good buzz, but now they will be a little bit down.”

Connacht’s half-time lead never looked sufficient given the incessant rain and wind that was at their backs.

Outhalf Jack Carty struck the first as early as the second minute, a reward for some strong counter-rucking by the Connacht pack close to the Warriors’ line, but they struggled to make an impact with their set piece coming under pressure. It gave Glasgow a platform to counter with three points from outhalf Peter Horne, who had missed a previous effort from a scrum penalty.

Connacht regained the initiative and carved out a scoring opportunity after fullback Darragh Leader launched a counter inside the Warriors’ 22, and concerted pressure from the pack resulted in new cap Jarrad Butler appearing to have grabbed an opening try at the posts, only to be denied by TMO.

Carty struck a second penalty after 18 minutes, but despite enjoying the lion’s share of possession, Connacht could only muster a third penalty on the stroke of half-time.

It did not take long for Glasgow to reduce the deficit, adding a penalty and try within two minutes. From the back of a scrum, Adam Hastings provided a great ball to Peter Horne who caught the defence napping, and Ali Price finished off, with Horne adding the extras.

Connacht opted to keep in touch with a fourth penalty after 60 minutes, but they squandered a couple of penalties in a period of domination.

Glasgow, despite flirting with offside throughout, particularly at ruck time, produced the greater cohesion in both attack and defence, striking the winning blow when left wing Lee Jones crossed after Price had delivered superb cross-field kick.