Wales put Ireland out of their World Cup misery 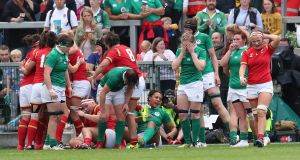 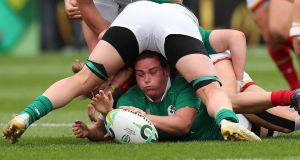 Tom Tierney’s tenure as Ireland women’s head coach has ended but the 40-year-old is not unemployed.

Do you know what you will be doing next?

Will it be with the IRFU?

“I wouldn’t say that yet. It’s just a private thing at the moment. I won’t be under pressure.”

When asked if he was moving into Ireland underage structures, possibly the male under-19s, he replied: “Again, I won’t be answering that. But I’ve done nothing else but be a rugby coach since I retired as a player.”

Despite Ireland slipping from fourth to potentially eighth in the world during his time as coach, Tierney added: “I’ve had three great years, I’m very, very proud of what I’ve done. It wasn’t an easy job to come into. It’s on to something else now.”

When asked about the Ruth O’Reilly’s interview in The Irish Times on Saturday, he added: “The timing of it was very unfortunate for the girls.”

However, when Ireland prop Lindsay Peat was asked about the same article she stated: “The IRFU have us on a media ban from 12 [noon] before the game until 12 [noon] the day after the game so I actually haven’t seen any media at all. I have deleted twitter off my phone. Even my family haven’t seen it otherwise they would have given me a text.”

Did it impact on the group? “As I said,” Peat added, “it goes across the board. The IRFU implement a media ban.”

The roar of genuine delight from this Belfast crowd for Katie Fitzhenry’s late consolation try told its own story. Ireland have not lost their loyal support base. The will at grassroots to grow the game still, clearly, exists.

And, lo and behold, after 376 minutes of lateral attack at this World Cup, Sene Naoupu moved to outhalf and the backs started dashing over the gainline.

Regrets and many, many errors will linger but the worst has passed for now. What comes next, as O’Reilly told us, is up to those entrusted with protecting the women’s game in Ireland.

Not the Sevens game. Because that is a vastly different sport.

The director of rugby for women (and Sevens) is Anthony Eddy.

Eddy has conducted one press conference this season. That was a hastily arranged gathering in February to explain the rationale behind removing three key players - Hannah Tyrrell, Ali Miller and Naoupu - from the Six Nations squad to Sevens so they could play in a tournament in Las Vegas.

Back up in Belfast this miserable campaign ended with a third defeat from five which means Ireland must now qualify for 2021 World Cup.

Another concern is that most of the IRFU funding and support will shift into the Sevens programme. There is a Sevens World Cup next July in San Francisco. On the evidence of this past fortnight, Ireland will struggle to compete in either code against the US, Canada, New Zealand, Australia, England, France and now Wales.

Not much of this 80 minutes will or should be remembered. The horse had bolted long before Naoupu was finally deployed as first receiver. Nora Stapleton has grown into this competition, her place kicking has been excellent, but the team has long craved a playmaker with a wider range of passing.

Wales, like most nations, are rapidly moving in the opposite direction to Ireland. Literally. In the opening 40 minutes they breached the gainline 31 times. Ireland trucked it up with success on 13 occasions as their reliance on energy sapping close-in carries eventually yielded a try for Paula Fitzpatrick.

Suffice to say, the “systematic flaws” O’Reilly spoke about were in full view yet again.

And then Naoupu slid into first receiver to spark a late revival. Retirements are coming but not Peat, who at 36 is keen to play on after only two years as a rugby player.