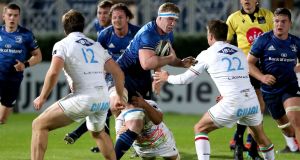 Leinster’s Dan Leavy in action against Zebre during their Pro14 clash at the RDS. Photo: Dan Sheridan/Inpho

Dan Leavy offered context to a journey of 18-months from a hellish injury sustained in a European quarter-final against Ulster in March 2019 to his repatriation in a match environment, a 30-minute cameo in Leinster’s 63-8 victory over Zebre at the RDS.

The warmth with which his arrival on the pitch was greeted by teammates was a mark of respect and affection for a player who had endured a great deal of suffering from the moment that his knee was obliterated through the rehabilitation process; to emerge from the wreckage and regain match conditioning was a painstaking trek that underlined his mental and physical toughness.

If he had any misgivings they weren’t evident. His voice carried into the empty stands, cajoling and organising, ever the player. Shivering against the late chill of the night he ordered his thoughts as he spoke to Leinster TV. “It was great, a weird atmosphere here, (with) obviously no fans or crowd. I loved every second of it, the knee felt perfect. It felt great to get out there again.

“It was pretty frantic in the second half, turned into almost a game of Sevens: thanks to everyone who supported me along the way.” It’s a long list and one that he was happy to thumb through verbally as he revisited ground zero.

“It was a really long and bumpy ride from the get-go. I was lucky to have the support right from Leo (Cullen), Stu (Lancaster) to the medical staff and my physio Karl (Denver) who have been tireless. The whole journey has been incredible. My surgeon Andy Williams over in the UK and everyone, my girlfriend Aoife, my family and all my friends just made it a bearable journey. To get back here and get such a good team win was awesome.”

For a player that was exiled from playing for so long he suggested that the timeline had “flown by” as he immersed himself in the minutiae of recovery. “My first target was to get the swelling down making sure that I was ready to get the operation. From there it was getting as much strength, muscle back before the next op; from there get the range back, get running, get moving.

“I am lucky to have the people around me, the support network, the physios, the S&C staff that I have at my disposal. There was a lot of hard work, a lot of tough days but with that team it was (made) possible.

“I haven’t even checked my phone but I am sure it has blown up with a lot of messages and stuff. It would have been nice to have friends and family here.

“My dad was thinking of sneaking in; I had to tell him not to do it because we would get in a lot of trouble. It has been great anyway. The team is so close-knit, we are all such good mates; it is good to have my good pals beside me.”

He might have bookended his re-appearance with a try but it wasn’t to be, ruled out after television match official Joy Neville had a closer look. Leavy smiled before poking fun at himself: “They should have given it to me anyway even if it wasn’t a try.

“Someone asked me if I had done any speed work in my return to play. The answer is ‘no,’ clearly. The slowest ever back three player for Leinster; and I am taking that with me.” He won’t be like that for long. The sharpness will return but for now being out there again will suffice.

Andy Farrell on Ireland’s autumn: ‘A work in progress’ 19:05
Johnny Sexton points to the positives but admits top tier still a way off 18:24
Derby’s win overshadowed by Millwall fans booing as players take the knee 17:52
Bezuidenhout stretches five clear as he closes in on back-to-back titles 17:22
Kevin De Bruyne masterclass guides Man City to comfortable win over Fulham 17:11
Here is your handy guide to sport on television this week