Cheetahs turn on the style against Ulster

Irish side torn to shreds in one-sided Pro14 clash 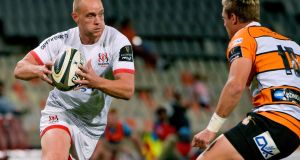 Matt Faddes of Ulster in action against the Cheetahs. Photograph: Frikkie Kapp/Inpho

Ulster were obliterated by the Cheetahs in Bloemfontein as the Cheetahs scored nine tries in a dominant display full of power and pace.

Former Ulster player Ruan Pienaar, playing his first competitive game against his former employers since leaving the province in 2017, kicked six conversions before leaving the field early in the second half with Tian Schoeman adding another two conversions to the total.

The Cheetahs powered their way into a 49-7 lead before Ulster really knew what had hit them and then with the game well and truly won they let the visitors back in to the extent that Dan McFarland’s embattled side made off with a try bonus.

The Cheetahs had their bonus point wrapped up just past the half hour with score from Dweba - who was sin-binned in the second half - and they led 28-7 at the turnaround after simply torching Ulster in every facet of play.

Ulster’s comeback of sorts only really began around the hour mark with the game at time resembling sevens it became so frenetic and open.

Dan McFarland now has a huge job to lift his charges for next Saturday’s clash with the Kings, Ulster’s final outing on their two-game mini-tour.