Steve Jackson: ‘At the moment we don’t know where we stand’ 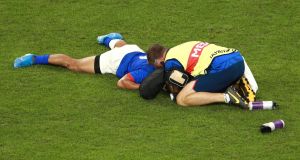 Jackson was visibly disgusted with the decision to yellow card TJ Ioane, for a late tackle on Kotaro Matsushima, considering Peyper only awarded Samoa a penalty and no further sanction following Japan lock James Moore’s late hit on Tim Nanai-Williams.

Nanai-Williams was eventually forced off for a Head Injury Assessment and did not return.

“There is nothing really in it,” Television Match Official Graham Hughes informed Peyper on review of the Moore contact. “(Nanai-Williams) just runs into him and that’s why he got injured.”

Peyper: “Anybody think that is foul play?”

The conclusion was just a penalty to Samoa.

“Mate, I take nothing away from Japan but I am extremely gutted on our ship. They deserve a little better than that.

“Timmy seems fine but we won’t know that until he wakes up in the morning. We’ll try and get as many players as possible on the pitch for Ireland next week.

“TJ’s was shoulder to the chest,” added Jackson. “We lose (Tim Nanai-Williams) to HIA and nothing happens but the officials are afraid to referee the game the way they see it.

“I think everybody here saw the last few games. I don’t know mate. You could play a game of poker with the amount of cards going out at the moment. Lost for words. We are on the end of another call when you are hit in the chest. I don’t know what you can do anymore in this game. You tackle low and you get ‘no arms’ (penalty) for going around the leg, you tackle a little higher and guys are dropping in the tackle.

“At the moment we don’t know where we stand.”

On Peyper’s decision to penalise Samoa’s last scrum, which led to Matsushima’s bonus point try, Jackson stated: “The opposition scrum did exactly the same as us in the next scrum. They get away with it. Sometimes I scratch my head.”

In a hugely controversial moment, with 82 minutes on the clock, Peyper reversed Samoan possession five metres from their try line for a crooked put-in to the scrum by scrumhalf Pete Cowley.

In a thrilling finish Matsushima crossed for Japan’s fourth try with 84:25 on the clock. The result leaves Japan on 14 points, Ireland on 11 and Scotland on five, with Gregor Townsend’s side having two matches to play.