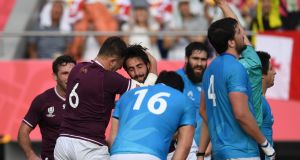 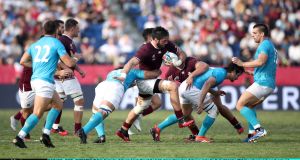 Georgia bounced back from their opening World Cup defeat to Wales with a comfortable 33-7 bonus-point Pool D victory over Uruguay.

Georgia’s superior strength was too much for Uruguay to handle as the Lelos ran in five tries at Kumagaya Rugby Stadium, with Uruguay replacement Facundo Gattas sent off late on for another poor high tackle.

It took just eight minutes for Georgia to break through as wing Alexander Todua broke the Uruguay defensive line and and they were awarded a penalty after coming up just short of the Uruguay line. From the resulting scrum, Georgia spun the ball wide and Todua had an easy run in to the line.

Number eight Otari Giorgadze then picked up from the base of another dominating Georgia scrum five metres out and there was no stopping him crashing over the line.

Uruguay immediately hit back from a lineout. Wing Rodrigo Silva burst through a series of Georgia tackles and laid the ball off to inside centre Andres Vilaseca for an easy run under the posts.

Georgia needed just two minutes of the second half to extend their advantage and it was no surprise that it again came from their dominance at the set-piece, Levan Chilachava burrowing over from a five-metre scrum.

Jaba Bregvadze secured the bonus point when he touched down from a rolling maul and moments later Giorgi Kveseladze pounced on a loose ball to add the fifth try after Silva spilled the ball close to his own try line and fly-half Tedo Abzhandadze added his fourth conversion.

Uruguay were reduced to 14 men three minutes from the end when Gattas left English referee Wayne Barnes with little option after a no-arms tackle, with his shoulder making contact with the head of Georgia flanker Shalva Sutiashvili.

5 Grand National hero Rachael Blackmore on the mark at Fairyhouse