Chastened Ulster can get back on track against Connacht 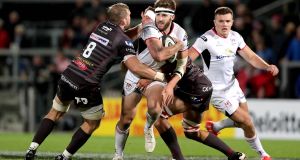 Stuart McCloskey: has been very effective on the gainline so far this season for Ulster. Photograph: Morgan Treacy/Inpho

Let the jostling begin. Although it falls outside the direct focus of securing a result in this match, individual performances will have a wider impact in helping to clarify a pecking order in personnel terms ahead of Ireland’s November Test series.

There is no final trial anymore but any time the provinces collide presents an opportunity to impress Irish coach Joe Schmidt. Obviously primacy can’t be distilled into a single performance but when Luke Marshall squares up to Bundee Aki, Kieran Marmion stares down John Cooney or Kieran Treadwell and Iain Henderson wrestle with Ultan Dillane and Quinn Roux it provides an edge in every sense.

There are other match-ups, direct and indirect, that will add further spice and then there are players who are simply in excellent form, Stuart McCloskey, Jacob Stockdale and Tiernan O’Halloran – to highlight three.

In looking at the contest directly, it is 57 years since Connacht won in Belfast; they have lost five of their last six matches against Irish provinces since coincidentally beating Ulster at the Sportsground 12 months ago and are on a run of three consecutive defeats.

However the bare statistics look a little less bleak when weighed against the quality of their performance in defeat away to the Scarlets last weekend. They gave the defending champions a proper rattle at Parc y Scarlets and will need to bring that mindset to the Kingspan Stadium, albeit on the flip side defending with greater cohesion.

Head coach Kieran Keane makes four changes to the side, switching Tiernan O’Halloran, who scored two tries in Wales, from wing to his natural home at fullback in place of Darragh Leader and welcoming the return from a groin injury of Matt Healy. Finlay Bealham is named at tighthead prop and, quite apart from his set piece prowess, his handling and distribution will give the team another dimension.

John Muldoon is back as both number eight and captain with Eoin McKeon shifting to blindside flanker. Connacht have serious pace and footballing ability in the back three but it’ll be about as useful as an ashtray on a motorbike if denied the scope to express those qualities.

Skerries-born Alan O’Connor doesn’t always get the plaudits his performances deserve, hard working and athletic, but he will be an integral part of a very big back five in a pack that includes a new front row. The intent is obvious, Ulster look to work their opponents physically at all the contact points and try and establish an edge in the set piece.

Marcell Coetzee’s recurrence of a knee issue is a significant blow as Ulster look a much better side for his presence but they do have depth in this area emphasised by the presence of Irish internationals Robbie Diack and Sean Reidy on the bench.

McCloskey has been very effective on the gainline so far this season, breaking tackles and getting his hands free to offload, so Carlow-born Tom Farrell, who can also get the ball away in contact, faces a tough remit.

Piutau can be unplayable in his pomp, while wings, Tommy Bowe and Jacob Stockdale, will be a threat aerially from cross-kicks. Christian Lealiifano brings nuanced game management and Cooney should relish his personal duel with Marmion, two quicksilver scrumhalves and team-mates from last season.

There should be a positive reaction from the Ulster group to last week’s substandard display but Connacht can argue that they can derive some confidence from several aspects of their performance against the Scarlets.

The venue won’t win the match for Ulster but they’re in slightly better nick so far this season, and that should nudge them to victory in what should be a decent contest. The bookies have it at 10-points in Ulster’s favour; if Connacht kick on from last weekend it should be closer than that.