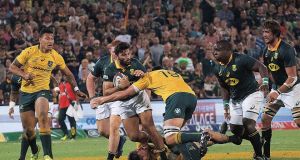 Elton Jantjies missed a last-minute penalty as South Africa and Australia drew 27-27 on Saturday, their second draw in this year’s Rugby Championship after a 23-23 stalemate in Perth.

Jantjies had a chance to win it for the home side, looking to bounce back after a record defeat in their last match against world champions New Zealand, with a kick from a tight angle but the outhalf hit it well wide soon after slotting an easier effort to bring the Springboks back level.

Both sides scored three tries in an exhausting match at altitude with players on both teams looking out on their feet at the end of 80 minutes. Australia were 13-10 ahead at the break.

Marika Koroibete, making his first start for the Wallabies, scored two tries but also gave away the penalty that might have led to his sides defeat had Jantjies not squandered the chance.