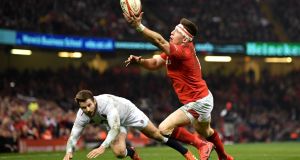 Josh Adams of Wales catches the ball prior to touching down during the Six Nations match between Wales and England at the Principality stadium. Photograph: Dan Mullan/Getty Images

Approaching the exact mid-way point of the 2019 Guinness Six Nations campaign, nearing half-time in the eighth game of the Championship, England were leading Wales 10-3 and pummeling their line. With Italy and Scotland to come at Twickenham, the Grand Slam looked theirs for the taking in what was shaping up to be a prosaic tournament.

Wales kept them out, kept their cool and outscored England 18-3 in the second-half, through their pick-and-go and aerial tactics. It was the pivotal game of the Championship in every sense, as it effectively proved a title decider. In many ways it also brought the tournament vibrantly to life and thus saved it.

The Six Nations is rarely linear. There are always twists and turns, and there is never an accidental Grand Slam. As they had also shown when trailing 16-0 in Paris on opening night, Wales are a redoubtable, resilient team who can always come from behind.

That comeback may have been down to the opposition’s implosion and Sebastien Vahaamahina’s ludicrous skip pass which George North picked off. But Wales have a way of applying pressure on the opposition, as Ireland were also painfully reminded last Saturday in Cardiff.

Warren Gatland had forecast before the Championship that if Wales won in Paris on opening night they could go the whole way. This was, as he again admitted in the aftermath of the win over Ireland, partly because thereafter the fixtures had fallen favourably for Wales, with a two-week run-in before hosting England and then a seven-day turnaround before hosting Ireland, who had six days.

Despite drawing his players mostly from a malfunctioning regional set-up, Gatland has meticulously broadened his squad’s strength in depth with the World Cup in mind and now with confidence riding high after 14 successive wins.

The three countries who went to World Cups as Grand Slam champions all reached the semi-finals – France in 1987, England in 1991 and in 2003, when they also went on to lift the William Webb Ellis Trophy.

Wales have risen to second in the world rankings above Ireland, but remain fourth or even fifth in the betting behind Ireland, which seems decidedly curious on the evidence of last Saturday.

Last Saturday was the most damaging day of a damaging campaign for this Irish team. But amid the almost hysterical reaction, it’s worth stressing that this was not the worst defeat in the history of Irish rugby or anything close to it. One could depress oneself by picking out at least ten worse ones, and that was just in the ’90s, or more going further back when less talented and more ill-prepared teams lost in a more supine manner. There were a few worse ones in the Noughties too.

It may be that this team had their Icarus moment last November when beating the All Blacks, but it’s too soon to say that they’re a spent force.

Although their confidence has been dented, they have enough credit in the bank from 21 wins out of their last 24 tests (with three titles including a Grand Slam, two historic wins over the All Blacks, a series win in Australia, and a first win in South Africa) to retain faith in each other and keep that of the supporters.

There are problems that need rectifying. Uppermost amongst these is the way they have been beaten by England and Wales across the gain line, and with that the lack of go-forward generated by their forward carriers as well as the need for more line speed in defence, fleetingly on display against France.

As they reminded us in that game, when generating go-forward ball and leading, they remain excellent front-runners. But then there is their inability to come back from behind, or as Joe Schmidt said, to become better at changing things up. In the last dozen games since the Argentina tour in 2014 when Ireland have trailed at half-time, they have won only once – against Italy three weeks ago in Rome.

With such a prescriptive side, there’s a lack of Simon Zebo-like X factor, or a player with Finn Russell’s box of tricks to spark Scotland’s astonishing comeback at Twickenham. If their lineout maul and forward carriers are stymied, unless there’s a spot play from Joe Schmidt playbook, this Irish team can look quite blunt.

But without re-inventing their attacking game, Ireland could develop more of a short kicking game and add a little more offloading. All of this is achievable. They remain a clever, high-achieving and proven group of coaches and players. One hopes Schmidt himself, and the other coaches, are not themselves too wounded by the flak. They have time now to step back, re-assess and re-group.

Scotland will be dangerous opponents come the World Cup opener with Stuart Hogg and others back in the mix, and always were going to be. They can take heart from last Saturday, albeit they still finished in fifth.

England found and re-discovered several players to make the most strides as an attacking force, their tally of 24 tries the second highest in Six Nations history. Eddie Jones attributed Saturday’s second-half implosion to the scars of the 2015 World Cup, which is laughable, but if so it doesn’t reflect too well on his healing powers. Declan Kidney did it in a year. Besides, where were those scars when England were winning 18 in a row? But, while flat-track bullies, England did make strides and are World Cup contenders.

Having unearthed more young gems, France finished relieved more than anything, but after two horror shows on the road, appear to be still in need of a new coaching ticket. Poor Italy finished crestfallen after leaving circa 24 points on the pitch when losing their 22nd Championship game in a row.

The World Cup is still six months off. At least Ireland’s downturn happened now, and not in September. Another positive is that whereas Wales return to a badly run regional set-up, the Irish players return to the warmer embrace of well-coached, successful provinces.

The pity is that all four quarter-finals are in a fortnight. But recall that after the 2007 World Cup, Munster regained the Heineken Cup later that season. As they are sometimes required to do, the provinces can begin the healing process. This Irish team is still good enough to reach the semi-finals or beyond.