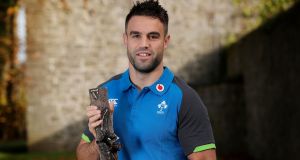 Conor Murray has been named Rugby Writers of Ireland player of the year at the annual awards hosted in the Guinness Storehouse. Photograph: Inpho

Conor Murray’s outstanding displays over last season and the summer earned him the Rugby Writers of Ireland player of the year award on Tuesday night in Dublin.

Murray can add the trophy to his Rugby Players of Ireland award, which he earned in May. To complete the trilogy, Munster were also voted team of the year at Tuesday night’s awards following a traumatic season during which coach Anthony Foley tragically died on a trip to France.

Munster last year made it to the Pro12 final and lost to Saracens in the Champions Cup semi-final in which Murray did not play.

But the scrumhalf’s personal contribution was standout and after a successful Lions Tour in June he made himself firm favourite for the Rugby Writer’s award.

“It was a really good year,” said Murray. “You find out a lot about yourself and your team when you go through something like that because at the time it was really tough.

“So, I think it’s a well-deserved award for our team, our organisation. Obviously, losing Axel, because that’s what this is about really, it left a massive hole and everyone just pulled in together and took up the mantle of things he might have done.

“Or if something needed to be done, people just bought into it unbelievably. Not that we hadn’t before but there was something extra last year. It was a year and a season you’ll never forget.”

Last season was one in which Murray picked up a concerning injury against Wales in the Six Nations. He hurt a nerve in his neck and was sidelined just as coach Warren Gatland mulled over his Lions selection.

“That was quite a worry for me. It was a nerve injury in my neck and I lost a bit of power in my left arm,” explained Murray.

Murray added that at 28-years-old he just wants to keep improving.

“Awards are really nice but I wouldn’t get fooled by them,” he said. “This is nice, it’s nice to reflect on and nice for the family to have on the mantelpiece at home. But the show must go on.”