Having recovered from his latest injury setback, winger prioritising a return to action with Leinster 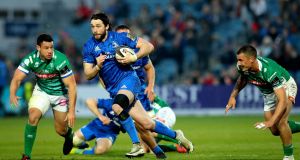 Barry Daly makes a break for Leinster against BenettonGuinness at the RDS. Photograph: Ryan Byrne/Inpho

Barry Daly’s rugby career could bring to mind the popular board game, ‘Snakes and Ladders,’ a volatile sequence of ups and downs. The 27-year-old Leinster wing/fullback has not only been ridiculously unfortunate with injuries but they arguably couldn’t have been more ill-timed.

He recounts the details almost by rote, or at least in the matter-of-fact manner of someone used to outlining his recent medical history time and again, dates, damaged joints and rehab timeframes.

This, though, doesn’t represent the totality of the challenges he’s faced and it’s important to unfurl that background to fully appreciate his mental resilience.

His talent has been recognised from his time as a schoolboy in Gonzaga although due to circumstances – a sojourn in France to learn the language in fourth year and an injury preventing him from playing rugby in fifth year – it wasn’t until his final year that he was incorporated into the Leinster development system.

He played Ireland Under-19s and was a member of a Mike Ruddock-coached Ireland Under-20 squad – it included Iain Henderson, Tadhg Beirne, Jack Conan, Chris Farrell, Tadhg Furlong, Luke McGrath, Niall Scannell and Josh van der Flier to highlight a few but by no means all of the future senior internationals – that played in the Junior World Championship in South Africa in 2012.

Daly seemed destined to fulfil a childhood wish to play professional rugby. He admitted: “I expected to be picked up by Leinster but I never got the call.”

There were tentative overtures from Munster but at the time that wasn’t part of the dream and the fug of disappointment obscured all other considerations.

He continued: “I had the summer off away from rugby and was so disillusioned at not getting picked that I said, ‘I’m just going to enjoy college, live a normal life.’”

A confluence of circumstances would revive his rugby career. He spent a year playing for the Ireland Sevens team and was the chief try-scorer in a Noel McNamara-coached UCD team that should have won an All-Ireland League title.

Cian Kelleher left Leinster to join Connacht and within a couple of months Luke Fitzgerald had his career cruelly ended by injury. Leinster needed a wing and Daly was offered a trial. He had already completed a business degree at UCD and spent a year doing accountancy exams while working at KPMG.

“I had just had a great year with Noel McNamara at UCD, an insanely good coach, who went on to move to Leinster rugby. I’m not sure who orchestrated what but I got a trial. I always thought I could play [at that level] because I was playing with lads who were coming down from the Leinster academy every week and I was thinking, ‘I am just as good as these guys’.

“When I made the decision to go for the trial I was all-in, including going into the boss’s office to ask for more time off having previously asked for a crazy amount when I was playing Sevens; KPMG were so helpful. The emotional aspect, will I try again and risk getting knocked back? You have to put yourself out there. Anything that’s worth doing is hard.”

He would come to fully appreciate that last sentiment. Daly made his Leinster debut in October 2016 and since then has managed just 36 appearances – losing a cumulative total of over a year to injury in that timeframe, the majority in the last couple of seasons. He scored 13 of the 19 tries he’s managed – better than one every two games and underlining his ability – in the one full-ish season (2017-2018) that he managed.

Injured in the first Pro14 fixture against the Cardiff Blues last year, he didn’t return until January while he’s yet to play for the province this season after sustaining knee ligament damage at the end of pre-season in a training mishap. There was a touch of gallows humour when he greeted the physiotherapy and strength and conditioning people following surgery with the phrase: “I’m back.”

One of Daly’s coping mechanisms was instigated by Isa Nacewa during his time at Leinster. He explained: “We do a lot of mindfulness stuff which Leo [Cullen] encourages. We do that once a week with the squad while other than that we do it ourselves. I don’t do it every day religiously like some of the people. Isa [Nacewa] brought it in back in the day. That helped me a lot at the start of the season.”

Daly focused on his rehab but also returned to the books.

“I targeted a plan before I got injured so when it happened I just put the head down and did a GMAT (Graduate Management Admission Test) aptitude test that a lot of universities use, so if I wanted to go off and do post-grad stuff whenever I finish up, I could. I ended up getting a pretty good score in that. That was a good way of keeping my mind off the injury.

“I would have gone insane otherwise. The coaching staff reminded us that the best players have stuff they focus on, off the pitch. It was three months of studying, a lot of it.”

There is a mourning period with any injury. He continued: “You allow yourself to wallow for a week and then it is just not helpful [any more]. You can’t just immediately go, ‘right I’m fine’. You have to eventually make the decision about not being upset about it.

“One of the most difficult things about getting injured or not getting picked is the reaction around you. They all want you to get picked or to be playing so that is one of the tougher points of it.”

Misery may love company but so do injured players. Last year Daly rehabbed with Will Connors, this time he’s had Jack Conan, Dan Leavy, Marty Moloney and Vakh Abdaladze for company.

He’s played two All Ireland League matches for UCD and is hoping that it proves he is fit enough to join Leinster on their two game mini-tour to South Africa for Pro14 matches against the Southern Kings and Cheetahs. The veldt has happy memories as it is there that he was clocked running at 10.5 metres per second; that’s marginally faster than England’s Jonny May.

Daly has the footwork, handling skills and aerial ability, has scored bucket-loads of tries irrespective of what level he’s playing and has worked hard on his defence. He admitted: “Defence was never my strength so the last few years have been a pretty big learning curve for me.

“Leinster has taught me to be disciplined. Being in a rugby team is like being in the army in a lot of ways. Your days are mapped out. I wasn’t very good at that when I came into Leinster, they whipped me into shape in the last few years. It definitely has helped me.”

He still harbours the same ambition he had when his father, Brian, took him to minis in Old Belvedere as a nine-year-old, still seeks to emulate the player he looked up to from childhood, Denis Hickie; Daly wants to play for Ireland. That’s the big picture.

The priority now is to get back playing for Leinster, playing for a new contract. Daly knows better than most how fickle fate can be. He must be due a break, in a good way because if talent alone becomes the sole arbiter of his rugby future, then he may well fulfil that ambition.