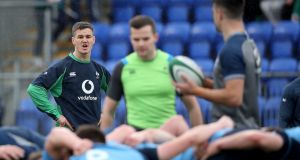 The Irish squad remain in the dark about when their postponed Six Nations match at home to Italy, scheduled for next Saturday but called off at the request of the Government over public health concerns regarding the coronavirus, may be rearranged.

The IRFU is contractually obliged to play the game at the Aviva Stadium and finding a date before May, at which point the ground it is under lockdown for the Euro 2020 finals, looks problematic, and realistically therefore if the game is to take place, the likelihood is a weekend in October – if at all.

“There’s a few dates being bounced about but they’re just ideas at this point in time, so we haven’t got a clue really,” admitted Irish head coach Andy Farrell following the squad’s public training session with the Irish Under-20s at Donnybrook on Friday.

“There’s a lot of ifs, buts and maybes, so as far as we’re concerned we’ll do what we’re told. We obviously want to play the game.”

Farrell maintained the postponement was not especially disruptive.

“Obviously there’s a bit of uncertainty of what may happen because of what you read about it, etc, and what’s going on in the world but we’ve got to make sure that we do the right thing as a game. We definitely will do that, but as far as distraction is concerned, we’re training, we’re rugby players coming to work, so we try and get better.”

Farrell was also sanguine about the decision to postpone the Italian game.

“Obviously we’re disappointed not to play again after a loss, that’s the first thing you want to do. Work out the reasons why and then get back out there on the pitch and put those things right. We’re disappointed but it’s the right decision, isn’t it? There’s more important things than a game of rugby, isn’t there?”

While there also remains a cloud over the other remaining games in this year’s Six Nations, including Ireland’s last-day meeting with the table-topping French in Stade de France on March 14th, the Irish squad will press ahead on the premise that it goes ahead. That said, they will restrict next week’s training camp to Monday, Tuesday and Thursday at the HPC in Sports Campus Ireland, before taking a long weekend off.

Asked if they expected the French game to go ahead, Farrell said: “We don’t know, that’s the answer, we don’t know. All we can do is prepare properly that the game is going ahead.

“We’ve been in for a few days this week and that was the normal prep that we was going to have anyway. We’re going to have a rest this weekend, come back in Sunday and train Monday and Tuesday, then Thursday. Then we have a long weekend off, so the key for us is to use the time appropriately and to our advantage as well.”

The Irish captain, Johnny Sexton, echoed Farrell’s disappointment over the Italian match being called off.

“As players, when you play bad you want to just go and play straight away. I was tempted to try and go play for Leinster tonight. There’s nothing worse than a long wait now, but that’s what it is. We’ve just got to prepare. We trained hard today and we’ve got another big week next week. We can get a lot fixed over the couple of weeks, so we’ve got to look at the positives, that we’ve got time to develop some things together now.

“We would just have preferred if it was two weeks. But it’s not, it’s three weeks and that’s the bottom line. We just have to get over it. It’s a decision that has been taken out of the players’ hands. We’d play it behind closed doors if we could but that’s not an option and we’re just going with the plan now. We’ll try and get ready for France.”

Asked about the criticism that came his own way after an unusually out-of-sorts performance, particularly on social media, Sexton said: “No, I’m my biggest critic. So I was gutted for the last three or four days, absolutely gutted with my performance. I was full of confidence going into the game and sometimes you have one of those days where the bounce of the ball, you let it affect you, and the knock-on is a few errors.

“Once you prepare well and have the best intentions to perform and do everything you can to perform. Most of the time it happens and sometimes it doesn’t. It is what it is and I’m well used to the criticism, I’ve had it for my whole career. One week you’re good and one week you’re bad. So keep it coming.”

Following his own inability to catch Ben Youngs’s grubber which led to George Ford’s try at Twickenham, Sexton admitted that both he and the backs outside him struggled to cope with the huge pressure by England’s ultra-aggressive defence.

“We had a great gameplan to try and cope with that. A lot of it revolved around trying to get to the space early. We couldn’t get there, for one reason or another, and then we kept trying to get there and we kept making things worse.

“So yeah, that was the disappointing part, the space that we got to against Wales and Scotland at times – obviously not as much against Scotland – we couldn’t get there.

“Some of that was their good defence but we were well prepared for that type of line speed, because we’ve played against it before, and we just didn’t execute well enough and it has a knock-on effect for maybe a poor delivery, poor first-phase execution, and then you’re struggling a bit. It sounds simple, but sometimes the answers are simple.”

In the fall-out from the 24-12 defeat in Twickenham, Farrell not only admitted the scoreline flattered Ireland but that his team did not seem as up for the game as they should have been.

Expanding on that on Friday, he said: “Well, you try and reflect and you get talking again as a group. We’ve certainly done that over the last couple of days and there’s been some honest feedback.

“We felt we were in a good place going into the game, ready for a big performance, ready for a Triple Crown performance but I think we let things affect us as we went on. Yeah, I thought we spent our own energy and fed theirs by numerous parts of our game.

“We let them completely dominate territory, didn’t we, early doors? A lot of it through their good play but some of it by our own wrongdoing as well. We need to learn those lessons and understand the effect that it can have on us. Having said that, we’d been pretty good in the first couple of games getting over setbacks. Yeah, we took a little bit of a step back in that regard.”

As for the theory that his players may have regarded the Twickenham game as a free hit, Farrell bridled a little when stating: “I hope not. I hope not. I certainly didn’t sense that from the playing group. They led each other superbly well throughout the week and towards the end of the week, we felt as management that they were in a good place.

“Again, the way that they started and the access that we gave them, obviously, when things are going pretty well for you and going according to plan, there’s a bit of confidence that keeps them on the rise. I suppose it saps you a little bit, not that it’s right. There’s a lot of learning in that.”

Farrell and his fellow coaches would probably have been of a mind to make a few changes for the Italian game, but such thoughts may be revised if the French match goes ahead.

“Well obviously we need to have a little bit of a think about it,” admitted Farrell, “but if you leave your mind open a little bit, you see what goes on over the next few weeks and then we’ll make a decision further down the track.”