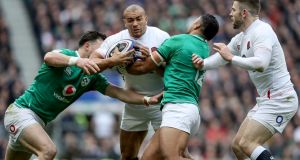 There are plenty of visions of the future around at the moment. One has three initials – CVC – and is entwining itself, triffid-like, around the commercial rights of almost every significant rugby competition worldwide. Another is the standing water on numerous pitches in England and Wales, a portent of what may await lower-lying communities everywhere should global warming intensify.

On Sunday at Twickenham it was more a case of joining the dots. There was George Kruis, a lock, aiming to kick the ball out of hand like a taller, gangly version of Owen Farrell. Charlie Ewels, another lock, could be seen packing down at No 8. Ewels’s Bath teammate, Jonathan Joseph, was on the wing, having played virtually all his previous top-level rugby at centre. Rugby’s much-discussed hybrid era, all of a sudden, was front and centre and hard to miss.

Eddie Jones is very much in the vanguard. Last season he was talking about Jack Nowell playing at flanker. Now he reckons the talented Saracens backrow Ben Earl could do a job in the backs. His bench for Sunday ostensibly comprised six forwards and two backs; his matchday squad of 23 included five specialist second rows. For decades coaches have spoken about up-skilling players so the number on their jersey does not matter. Introducing a whole new breed of multi-taskers, it would seem, is the logical next step.

Is this necessarily a good thing? Cricket long ago discovered that filling your entire team with bits and pieces all-rounders can leave you vulnerable against the most penetrative bowlers or destructive batsmen. And are we really suggesting that a centre is a better bet on England’s wing than someone who plays there every week? That Wales should play the versatile Nick Tompkins on the left wing instead of a natural-born try poacher like Josh Adams?

Jones’s view is that it depends more on the opposition and how you are seeking to unsettle them. Sunday’s England win over Ireland was a perfect example. The home side’s strategy was to kick – often – and keep Ireland pinned back in their own half for as long as possible, backed by excellent defensive line-speed and relentless physicality. The aim, in other words, was to beat Ireland at their own game rather than be sidetracked by someone else’s notion of classical rugby beauty.

If that means a dozen all-action, interchangeable big hitters strung across the defensive line, so be it. Jones picks his teams less on individual merit than how much collective pressure they – and he – can pile on the opposition, either at close quarters or aerially. He wants all his players to be the kind who repeatedly jump off the floor and get stuck in again, scrap for everything and soak up an almost unnatural amount of punishment.

It explains why Tom Curry, a flanker by any traditional measure, is Jones’s No 8. The coach wants energy and a relentless work rate, to which subtlety or more bulk can be added if required. He is on a different wavelength to most selectorially because he reckons he can sense the direction in which the constantly swarming, increasingly claustrophobic modern game is heading.

Begin to think along those lines and it starts to matter less whether Joseph is the best specialist winger in the country than how awkward his defensive excellence makes others feel. Jones is looking to get on top of teams, mentally and physically, as much as go around them. When it works England look a seriously dominant team.

Which begs the question: what happens if every team start to do the same? Think about it. If wingers and centres and wings and full-backs become almost indistinguishable and the same is true of locks and flankers and flankers and No 8s, what price the old line about rugby being a sport for all shapes and sizes?

Already you can see it lower down the scale. Youngsters are being picked for Premiership academies less on skill than size and physiology. Nine, 10 and 15 are probably the only remaining positions where instinctive skill is to be trusted and, even then, not at every club. It was fascinating to hear Matt Dawson saying the other day he probably wouldn’t make it as a scrum-half now so different have the requirements of the role become.

These days fresh turbo-thrust off the bench is also critical to Test match success. Luke Cowan-Dickie and Ellis Genge made an impact against Ireland and Jones reckons he is ahead of the curve here, too. “Joe Launchbury comes on, it’s like the NFL. He’s a maul specialist. At the first maul we score a try. Outstanding. Earl comes on, there’s a bit more dynamism. Cowan-Dickie contests hard at the breakdown. That’s all on the back of the work the starters have done.” First the hammer, then the nails. As a six-word summary of how the modern game is evolving it feels accurate enough.

And if numbers on backs really are irrelevant and players interchangeable there could soon be a bonus: an end to those toe-curling expressions ‘finishers’ and ‘game-changers.’ Teams could simply be listed from 1-23. Or, perhaps, 1-20. If fewer specialists are needed in the brave, hybrid new world, surely the number of available substitutes should be reduced? If Sweet Caroline can also be quietly pensioned off the future really will be bright. - Guardian