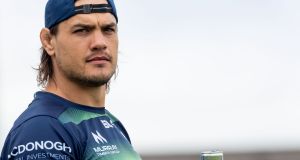 Quinn Roux is set to return to the Connacht fold against Munster this weekend. Photograph: Connacht/Inpho

Connacht coach Andy Friend is sticking to his plan to name a different starting XV for Sunday’s Pro14 fixture against Munster at the Aviva Stadium.

After securing a 26-20 win over Ulster, Friend remains committed to his promise to give another 15 the chance to shine, and believes the win last weekend will prove an incentive for those selected for Sunday’s second interprovincial meeting.

“All eyes are on Munster now,” says Friend. “The pleasing thing for us is the performance of that 15 who played against Ulster has given the blokes against Munster an incredible benchmark whereby they are going to say ‘I know I’m going to have to be better than that’.

“We said from the outset we were treating these two games as opportunities for players. The players who started on the weekend, and those who came on, set the bar high, so we have another group of players who are pretty keen to get out.”

“I know Jack, Bundee, Ultan and, Kieran and others would love to be playing [against Munster], but the key message from us, and I did speak to Andy Farrell about that, is they just need one performance - ‘give us one good performance and we will see it’.

“The boys can rest easy that they have given us one good performance, and it is another bloke’s chance to see how he goes.”

As a result outhalf Conor Fitzgerald and Caolin Blade will form the halfback pairing, new recruit Sammy Arnold is a likely starter in the centre, Tiernan O’Halloran, having recovered from injury, could well return to fullback, and the backrow could feature Conor Oliver, and another exciting prospect, Abraham Papali’i.

Importantly lock Quinn Roux will also return some eight months since his last game, which was notable for being his 100th Connacht cap. Munster were also the opponents in that December fixture, the visitors winning 14-19 at the Sportsground. Since then Roux has undergone two operations for a thumb injury - the latest, he says, was during lockdown.

“I had a slip up and had a repair done after the Christmas injury, so I am looking forward to getting on the pitch again, it’s been a while,” he says.

Roux, who has 12 caps for Ireland, is another Connacht player limited to one game to impress the Ireland coach Andy Farrell.

“Given the amount of games, we only have these two weekends to show what we can do, and it’s been eight months since I played, so personally, it’s a big challenge. But I’d love to put up my hand this weekend and show I can get back into the squad. He’s made it pretty clear, he’s going to pick lads on form, so I have one opportunity to show I’m back in form, but I’m excited to try to get back into the squad.”

Munster, too, have injury issues, not least RG Snyman, who also attended the same high school as Roux.

“There was a lot of expectation on him. He’s a serious signing and you could see in the World Cup the kind of a value he can add, and so it’s hugely disappointing for Munster, but especially for him - a guy who wanted to show what he was about, so it’s never nice to see that.”

Despite the loss of Snyman and Jean Kleyn, Roux says Munster still pose a huge test for Connacht at lineout time with Peter O’Mahony and Billy Holland.

“To be honest they are still a serious lineout challenge, no less than if they didn’t have injuries, so the challenge will still be massive. They have quality operators in their still.”

Connacht’s task, he says, is to back up last weekend’s win over Ulster.

“It is always challenging to back up performances. We want to build and be consistent in getting results, so it will be a good test for us this week and something we have to embrace, especially with the new lads who will be getting an opportunity.”