Worst sporting moment: Wales beat Ireland in Wellington - the one which really got away 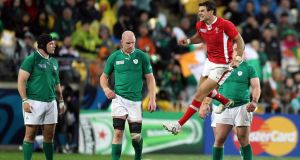 Eventually you make a pact with yourself. Enough of these dazed walks up Jones’ Road as the light declines.

Sam Maguire winters in Kerry or Ulster. In 2006 this was accepted as permanent reality after the ‘Mill at the Hill’ debacle, when Pillar Caffrey rammed his shoulder into the back of a smirking John Morrison, before Ciarán McDonald curled the point that silenced one million Dubliners.

By the time we landed back in Ranelagh you’d barely know an All-Ireland semi-final had transpired. The rugby season began over those pints as it dawned upon us that nobody cares about our sadness, especially when it centres around the Dublin footballers.

The problem with such pacts is you become cocooned from the rare bouts of joy. Sitting in the shade and passing judgment is no way to witness sport. You have to get burnt to get a tan.

It was the early morning of September 17th, 2011 that the sun shined back in. The beating Paul O’Connell, Stephen Ferris, Séanie O’Brien and Cian Healy handed Rocky Elsom’s unsuspecting Wallabies at Eden Park will stand the test of time.

This was a perfect weekend. The next day Dublin’s drought was ended as those very same faces up on the Hill swallowed Stephen Cluxton’s free.

Amid intoxicating joy of your county capturing the All-Ireland, deep down in New Zealand, a decision was made to re-replace Johnny Sexton with Ronan O’Gara as Ireland outhalf.

O’Gara deserves enormous credit for battling back from his calamitous end game for the Lions against South Africa in 2009 to transform himself into a priceless relief pitcher behind Sexton.

Our attack shape was terrible

This was easily the best Ireland team I’ve ever seen: Kearney, Bowe, O’Driscoll, D’Arcy, Earls, Sexton, Murray, Healy, Best, Ross, O’Callaghan, O’Connell, Ferris, O’Brien, Heaslip, with Leo Cullen, Geordan Murphy and Shane Jennings inspirational behind the scenes – but the players were denied the sophisticated preparation that they all craved.

“Our attack shape was terrible,” said Brian O’Driscoll in 2014. “We didn’t really have a good understanding of what we were trying to do in attack. Wales were brutally efficient with what their gameplan was.”

Ireland appeared to be playing “cup” rugby in the fashion of schoolboys from the 1990s. Murphy subsequently revealed, in his autobiography, that several attempts were made to introduce the basics of Leicester’s multi-phased attack into the Ireland camp. He literally handed over the Tigers playbook but Ireland head coach Declan Kidney declined to embrace what are now the fundamentals of any modern attack.

“You can’t rely on your defence to win a World Cup,” O’Driscoll added. “You have to have an attacking game and we just didn’t have one of them. That curtailed our capabilities, you look back on that now, for sure it did.”

The defence did not hold. Warren Gatland switched the Welsh wingers – Shane Williams and George North – to bamboozle Ireland in the opening seconds. It helped enormously that Jamie Roberts caught a high ball over Rob Kearney and bounced Donncha O’Callaghan as all the physical markers were laid by Welsh men.

Sexton’s three World Cup experiences would tear the heart out of most athletes. Valid excuses are everywhere; in 2011 the coach betrayed him for an old mistress; in 2015 the heavy thud of Louis Picamoles and poor handling of the injury proved Ireland’s undoing; in 2019 nagging limbs refused to obey his command as defeat to Japan happened, once again, with him sitting in the stand.

But that 2011 quarter-final in Wellington remains the most underwhelming moment in modern Irish rugby history because of the personnel at Kidney’s disposal. Here was the rarest gathering of men, with a blend of power and skill that no Ireland team had ever known, and they were self-made winners, which made them more than capable of winning a tournament that was suffocating the life out of its hosts. Dan Carter had torn his groin and Richie McCaw’s foot was stapled together with metal pins. What’s more England and the Springboks were all over the shop. The French were simply a joke.

O’Gara snatched the 10 jersey from Sexton, a decision that follows Kidney around especially after a season that saw Sexton post 28 points in the European Cup final to mastermind Leinster’s miracle revival against Northampton.

“At half-time against Australia I overheard Declan asking our kicking coach Mark Tainton if we needed to make a change at outhalf,” Sexton remembered last year.

It was 6-6. He had kicked one from three penalties and slotted a drop goal behind an Irish pack in quare form. Poor Will Genia took the brunt of it.

“Early in the second half I’d a kick to put us in front and I nailed it. Having heard what I heard at half-time, because they didn’t see me, that was a big kick for me.”

It was a perfect kick

O’Gara stripped on the touchline during Sexton’s back swing but he replaced Gordon D’Arcy so the starting 10 moved to inside centre. Two minutes later Cian Healy won a scrum penalty wide on the left.

“It was a perfect kick,” Sexton remembered. “I hit it exactly where I wanted it but it just drifted slightly on the wind and hit the post.”

O’Driscoll was denied a certain try as the bouncing ball evaded his fully extended fingertips.

That’s when O’Gara took over.

“If I didn’t hit the post there I probably would have taken the next two kicks. No kick is straight forward but the next two were easier [to make it 15-6]. Suddenly I would have been five from seven with a drop goal, kicking all the points to beat Australia, and it just changes the whole complexion of my performance, of me. I probably get to play in the quarter-final against Wales.

“It comes back to those small things, in off the post or holds its line for another yard and things just change totally.”

The best outhalf in Europe was benched for the next three matches. When Sexton replaced O’Gara in the Wellington quarter-final Ireland trailed 15-10. Eight minutes later Jonathan Davies tip-toed between Healy and Keith Earls to make it 22-10. With 15 minutes to play Ireland thundered downfield but individual errors came from the strangest places imaginable.

Ireland denied by the wily Gatland and Shaun Edwards’s very simple plan to halt any gainline possession by chopping their ankles. The numbers do not lie: Dan Lydiate made 24 tackles, Sam Warburton 18. Seán O’Brien covered just 24 metres from 22 carries.

So disappeared the golden generation’s chance of reaching a World Cup semi-final against a calamitous French side – in full revolt against their coach – before a final back at Eden Park against the nerve-jangled All Blacks.

Sexton moved ever on, winning two Six Nations after leading the Lions to a Test series in Australia, to revive the highest expectations come RWC 2015. Then, 25 minutes into the final pool game against France, Picamoles drilled Sexton’s arched body into the turf.

“We scanned it that night which wouldn’t be done now, because you wait 36, 48 hours to let the injury show up. Scan came back clear so I thought I was imagining things but I definitely felt what I felt. Probably because the scan was clear we managed things not as well as we should have those first few days. And that was costly because as it transpired I probably could have got back for the quarters if I had done things slightly different but, again, hindsight is a great thing. Yeah, it’s a huge regret not being on the pitch for the Argentina game.”

Japan 2019 was supposed to be different but, just like before, Sexton was denied the opportunity to control events in Shizuoka.

The 35-year-old at an empty Aviva stadium last Saturday would have been an ideal figure in Wellington. Or the coach could have supported the 26-year-old version – with the weight of expectation on his shoulders at his first World Cup – what with the memory still fresh from how he destroyed Northampton.

New Zealand never seemed so brittle, so gripped by fear during their 8-7 victory over France in the final. O’Gara would have been the perfect man to close that game down.

Instead that Wales defeat will continue to haunt them all as the light declines.