Leinster return in style but have plenty of room for improvement 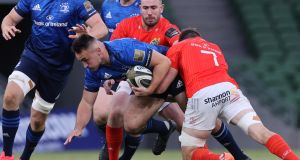 Coaches enjoy a ‘to-do’ list between games, albeit not a lengthy one, on the basis that no performance is flawless. The match imperfections bring an edge to training and filter out any traces of complacency.

While the result would have brought some satisfaction, there were aspects of Leinster’s performance in the 27-25 Pro14 victory over Munster at the Aviva stadium that were less edifying, ones that will offer a focus in practice ahead of next Saturday’s game against Ulster at the same venue, irrespective of playing personnel.

The breakdown and lineout were two facets of the game that will have borne sharp scrutiny in the review and necessitated a reboot as improvements are sought. Leinster assistant coach Robin McBryde acknowledged as much as he reflected on the victory.

“After the game there was a sense of relief having had the win. There was a little bit of disappointment in the way that we finished it because we could have made life a little bit easier had we converted pressure into points from that five-metre scrum.

“Obviously we had issues at the lineout which hampered our attack and I think there was quite a bit of fatigue in there from having a late kick-off, managing the day and emotions in the build up to the big game. So, there were a lot of things in there.

“Even from a coaching point of view, I was pretty drained after the game and Sunday as well. We’re mindful of that and it will take us a little while to hit our straps with regards to how we recover and manage it all.”

There was always going to be an element of rust given the fact that Leinster’s last game prior to the weekend was in the spring. Matches offer a rarefied environment in terms of intensity that training can’t replicate.

McBryde elaborated on the topic: “As much as you try and replicate it with the quality of squad that we have from a training point of view, there’s nothing quite like that game because you don’t know what they’re going to throw at you whereas we know what to expect from each other when we train against each other. It was a good challenge, a good test for us and we’re just glad to come through it on top.”

While escaping with just one major injury concern, a hamstring strain for the unfortunate Dave Kearney, there were plenty of sore bodies and that may be reflected in team selection for the Ulster game. One player who may return is Lions and Ireland tighthead Tadhg Furlong.

“It was just precaution (that he missed the Munster match); he had a twinge in his back. We didn’t want to risk rushing him back for the game so he’ll be up for selection this week,” the Welshman said. “He’s been training well [over pre-season]. He had a little niggle with his calf but he was building up for the game (nicely prior to the back spasm).

“He’s chomping at the bit, especially after the game on Saturday where Andrew (Porter) scrummaged particularly well.” While there was satisfaction with the way the scrum went, the lineout, breakdown and penalty count need to improve.

McBryde continued: “I thought the scrum went well for us, very happy with that. It was the lineout where we didn’t get the platform right for our backs to attack from. It’s not as if we didn’t know about [Peter] O’Mahony and how big a threat he is aerially. We didn’t deal with it very well. That’s definitely made it easier to see where our priorities should lie building up for Ulster.

“The contact area was another one. Munster targeted our breakdown pretty heavily with a lot of numbers; they caused us some difficulty there. So, irrespective of what the team is going to look like there are certain things that we need to get right in terms of our attack shape, in the way we exit, in our lineout game.

“We’ve gone so long without having a game, without having anything to work towards and having to construct scenarios and come up with ideas. We’ve actually got something to physically grasp now. It really has set the tone in terms of ‘where weren’t we very good? What do we need to improve on?’

“On the weekend it’s (about) improving our lineout, definitely, making sure we exit effectively and making sure we manage the contact, the breakdown.”

McBryde also felt that the players adapting to the new breakdown laws will take a couple of matches citing the example of Super Rugby. He also made the point that it is not just the players but referees who are feeling their way through the new directives after a six month sabbatical of no games.

“It will take a little bit of tweaking here and there to get everybody on the same page interpretation-wise. Andrew (Brace, last weekend’s referee) has been here with us, taking training sessions, so there’s a fairly good understanding there with Andrew and the dialogue is pretty good. It’s getting to grips with things like that and giving it time to settle down, I suppose.

“When you think about Super Rugby in New Zealand, their competition, after two rounds everyone was shaking their heads thinking what are the referees doing? They’re killing the game, giving so many penalties; it’s stop-start, etc.

“Following those opening games, everyone was on the same page and we saw some great rugby being played. So, hopefully after last Saturday and this weekend there will be a better understanding and that will make it easier to be a bit more effective in that area.”

Expect a shake-up in the Ireland frontrow; Sonia O’Sullivan on the difference between running fast and racing 07:23
Joey Carbery set for Munster return against Cardiff on Friday 07:00
With 19 wins in a row, Man City’s aura has been restored 07:01
Japanese fans told not to cheer during Olympic torch relay 06:51
‘I just feel very sad at the moment’ – Gemma O'Connor reflects on 19 years with Cork 06:31
Crossword Get access to over 6,000 interactive crosswords