With talents such as Owen Farrell and Maro Itoje in their ranks, they look unstoppable 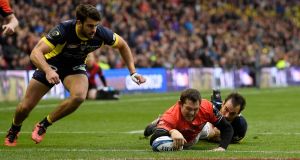 Everyone talks about winning being a habit. In rugby it is more complicated than that: nothing comes easy and conquering Everest always has to be done the hard way. Not so long ago Saracens were a team – and a club – with recurring altitude sickness; these days, in Europe particularly, they are the high and mighty masters of all they survey.

Two successive European crowns certainly elevates them to select status. Only Leicester, Leinster and Toulon have won back-to-back titles and no one has ever stayed unbeaten for 18 games on the trot. If Toulon are the only side to have achieved the hat-trick between 2013-2015, they required far more galacticos than Saracens possess. Winning glittering prizes with one’s own home-polished diamonds against rock-hard French opposition is the rarest trick of all.

So where are the north Londoners in the all-time pantheon? Right up there and still climbing is the unavoidable conclusion. A lot of good sides have never won even one European Cup, this long-suffering Clermont team being one example. Even Toulouse, so synonymous with Europe in its earlier days, never managed a double whammy. In the cases of the Tigers, Leinster and Toulon, furthermore, their big players were at the back end of their careers, reaping the rewards of decades of trial and error. Saracens’ kingpins are still in their early- or mid-20s.

For that reason they are a uniquely modern wonder: a tight group of players seeking to create a dynasty who have never heard of Dynasty. As bloody-minded as the Leicester mutes of old, as skilled at knockout rugby as Wasps, as defensively passionate as Munster; Saracens do not always ooze all-time greatness but they have a magpie’s eye for the qualities that define consistent winners. Mark McCall is the last bloke to blow anything remotely resembling a trumpet but his record is starting to make Ian McGeechan, Warren Gatland, Guy Novès and Declan Kidney look like relative beginners.

Initially at least this Murrayfield marvel was a particular masterclass, with first half tries from Chris Ashton and George Kruis establishing a 12-0 lead before Remi Lamerat struck. If Saracens had been clad in black jerseys with a silver fern, the world would have been acclaiming the total rugby they played in the first half, the hard-nosed precision of their approach work and the incisiveness of their finishing.

When they are really humming it all looks so seamless, so simple, as if the hours of relentless training-ground toil were barely necessary. Like so much of the Saracens operation it is a clever illusion; no side are this smart and organised by accident. It does not seem to matter where they run out, either. Last year in the rain in Lyon, this time in a blustery Edinburgh: the backdrop is far less important than the rock-solid mind-set with which they travel.

How the British and Irish Lions would love to export something similar to New Zealand this summer. Gatland will be praying the remarkable Vunipola brothers, the increasingly influential Jamie George, the indomitable Owen Farrell and the tireless second-row duo of Kruis and Maro Itoje can save a little bit of energy for the All Blacks.

On days like this Ashton must wonder about the wisdom of his decision to leave for Toulon. Most opposing teams would have been broken by Saracens’ first-quarter brilliance alone; it was a tribute to Clermont’s resilience and breakdown brilliance that the game was not to all intents over by half-time.

Measuring a champion’s worth is partly about gauging the quality of their rivals. To keep a side as good as Clermont at arms’ length requires serious ability. Damien Chouly, Peceli Yato and Fritz Lee are a particularly tough back row – and many have been blown away by the power of their front five. While Saracens ultimately allowed themselves to be sucked into a closer contest than had seemed likely initially following Nick Abendanon’s stunning counterattack try, there was no sense of panic or inferiority even prior to Alex Goode’s crucial score.

Perhaps the only area where they still cannot compete with Clermont is in the stands. Every major game in which the boys from the Massif Central are involved is a Coldplay day: it is all yellow. In terms of travelling support Saracens remain a modest outfit but out where it matters they increasingly have all the answers. (Guardian Service)

1 Seán O’Brien: Anger over my parents’ break-up never left me
2 Madness or defiance? The GAA is taking a huge gamble in staging Championships
3 Plenty of positives for Farrell as Ireland hit the ground running
4 All in the Game: Klopp’s Amsterdam subs don’t go down well
5 The Offload: Outgoing Tom Grace will be missed by IRFU
Real news has value SUBSCRIBE