No quibbling with Scarlets' status as champions 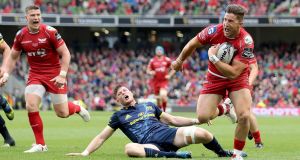 Scarlets DTH Van der Merwe runs in for a try against Munster in the Guinness Pro12 final at the Aviva Stadium. Photograph: Dan Sheridan/Inpho 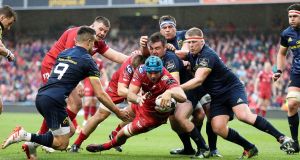 Munster may have finished atop the 2016-17 Pro12 table and nine points above third-placed Scarlets, but such was the scale of this record-breaking winning margin for a Grand Final that there can be no quibbling whatseover with the Welsh team’s status as champions.

The Scarlets again produced some wonderfully fluent and easy-on–the-eye rugby to back up their wins in Thomond Park and the RDS of late over Ireland’s big two, not to mention a rout of the Ospreys in between, with what was, given the circumstances, their most handsome win of all.

The pity was that the final was such a bridge too far for Munster who, akin to Leinster a week before, looked a little drained physically and mentally. For a final to be done and dusted barely half-an-hour in can safely be described as anti-climactic.

Munster’s lack of intensity was compounded by a lack of accuracy with the ball, whether that be their poor pass-catch skills, carrying into contact or clearing out. This was manna from heaven for an uber confident, in-form Scarlets team, who announced their intention to go wide and look to run from anywhere on the pitch in the opening minutes.

The day’s heavy rain had abated come kick-off but whereas Munster made the ball look like a bar of soap, the Scarlets’ passes stuck like glue.

Heretofore the meanest team in the Pro12, all of this was compounded by Munster’s surprising raggedness in defence. Although they must have known what to expect and had been forewarned by the Scarlets’ comeback win at Thomond Park in February as well as the Welsh team’s recent exploits, Munster’s narrow defence was frequently outflanked, as they failed to number up, bit in and left forwards exposed on the outside rather than their quick men.

They also fell off tackles alarmingly, missing 29 in all (complared to the Scarlets’ 15) and conceding 16 line breaks to six despite having a near 60 per cent share of possession and territory.

The selection of Francis Saili also backfired. For all his X factor and ball-carrying ability, Saili’s wild, lone wolf defending is too much of a liability for his team-mates. There were ample warning signs before and after Liam Williams scored the opening try as Rhys Patchell’s crossfield kick found Keith Earls both relatively narrow and yet still exposed, with Munster twice indebted to the covering of Conor Murray.

The game wasn’t even two and a half minutes old when Saili shot up, as he does, but failed to prevent Scott Williams getting his pass away and so it continued. Saili got lucky once, with more than a hint of a deliberate knock-on.

Come the 20th minute, Saili again shot up and bit in to no good effect, distorting the blue line and bringing Peter O’Mahony up with him before failing to prevent loosehead Rob Evans moving the ball on to the impressive former Leinster lock Tadhg Beirne. Niall Scannell was left to forlornly cover across as Jonathan Davies and Steff Evans twice exchanged passes to beat Earls and Simon Zebo. For what had now become a rout, the defending was again lamentable as Gareth Davies and Beirne added more tries.

Rouse themselves though they did, with a well-worked try by Tyler Bleyendaal at the end of the first-half, and late long-range consolation scores by the wingers, Andrew Conway (with Saili creator in chief, it has to be said) and Earls, thereafter it was like watching a cat toy with a mouse. DTH van der Merwe beat three more missed tackles for the Scarlets’ fifth try, and fittingly the brilliant openside James Davies had the final say to the second-half backdrop of a Welsh sing-song in the stands.

This was only the Scarlets’ second championship crown, and first since 2004, and after it their Kiwi coach Wayne Pivac invoked the landmark 1972 win by 9-3 over the All Blacks.

“It’s huge. The club had got a proud history. There’s a lot of talk about what happened in 1972 and we’ve talked as a group about building towards achieving the goal we’ve achieved. We were ready to create some new history and build going forward. It’s very pleasing today to put the icing on the cake on what’s been a great timing of the run.”

Pivac has won a couple of New Zealand championships with Auckland and added: “I’ve been lucky enough to win a few but this one is special because I don’t think we’re in the top three or four budgets, we’re probably seventh or eighth, and it’s just been getting quality people in and around the group with management and then getting quality individuals and our recruitment has been quite smart.”

“Tadhg Beirne’s a classic case. He’s nowhere near on the biggest contract, I can tell you, but he’s one of the biggest players. We’ve been fortunate this year that we’ve finally got a squad together. It takes a couple of years to get the squad you want when you come in and Rassie’s finding that now with Munster. He’ll want to make some changes no doubt and when you’ve got contracted players for the next year or two it doesn’t happen overnight. The same with your staff. It takes a bit of time and this has been three years of hard work, it hasn’t just happened this season.”

Pivac also had empathy for a Munster side that has coped with the tragic loss of Anthony Foley and topped the table while reaching the semi-final of the European Champions Cup as well as this final.

“He’s done fantastically well, topped the league and then won a semi-final comfortably. He came up against a Scarlets side who were in really hot form and our guys played exceptionally well. But what Munster have done, with what they’ve had to deal with this year, nobody would want to be in that position and Rassie’s done tremendously well, that whole group has, to pull together when you lose an integral part of your organisation in the way it happened. You’ve just got to say they’ve had a fantastic season.”

On Saturday, it just didn’t feel like they had.