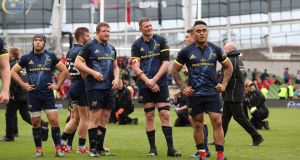 Munster have made sometimes magnificent and undeniable strides in this emotional rollercoaster of a season. A calm, emotionally intelligent hand on the tiller has been integral to this and while the scale of Saturday’s Pro12 final defeat to the Scarlets might suggest Munster still have a long road to travel, this poor performance will not change Rassie Erasmus’ view, or review, of Munster’s season.

“No, it wouldn’t. You have to be realistic. I know it’s a tough thing to say, and maybe not the right thing that people will want to hear, but it’s the reality. You look at how much you’ve grown this season, and we’ve grown to be finalists, but Scarlets have been building that squad for two or three seasons, and we’ve been doing it for ten/11 months.”

“I’m not upset with the players. The only thing that’s bad is that we’ve lost, but it’s worse not to give something back to the supporters, who have been through a lot this season. They’ve been awesome, that’s the sad thing. But the great thing is we’ve outgrown ten other teams, and European teams, that’s the great thing. The sad thing is to lose in the final and not give your fans more back.”

All that said and done, Erasmus candidly conceded: “We got smashed today.” Noting how their defence had performed this season until missing so many one-on-one tackles in this final, and crediting Wayne Pivac and the Scarlets, Erasmus added: “It’s disappointing, because that’s not the standard we had this whole season and it’s a pity it happened in a final.”

Whereas Peter O’Mahony, CJ Stander and Conor Murray had red-eye flights to London Sunday morning and the considerable upcoming distraction of a Lions tour, not so for the rest of the squad, although Erasmus believes there will be no psychological scars from this beating.

“Our next game is not until September. So many things happen in pre-season; guys get confidence from warm up games. When we got here last year we said ‘let’s maximise potential’. I really thought we maximised potential this year. Nobody will think when the season starts, in the first game, ‘oh we lost by 40 points to Scarlets’. It will be a new season.”

Asked to review this one, Erasmus became a little emotional. “I think the thing that I’m the most surprised about is how quickly Irish, Munster players learn, adapt, try, believe and support you. For me, that’s unbelievable. You come in and you say ‘boys, we’re going to do X, Y and Z’ and they just blindly follow you and believe in that and try their hardest.”

“The supporters get on to the bandwagon and they believe in you, so for me the greatest thing that I felt this year is that it doesn’t take years to ingrain something. People quickly believe in it. I have to look at it more realistically and not emotionally tonight, because we’re all emotional if we get thumped in the final like that. It’s a very coachable team, a team that adapts and believes in one another. They’re distraught in there, they felt they dropped the whole supporter group. For me, that’s the greatest part. This team can quickly gel together.”