Gordon D'Arcy: Leinster needed to fall, now get back up again 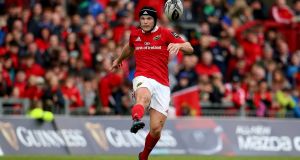 Tyler Bleyendaal has done well this season but now, on Saturday, he’ll be asked to close out a final, to stamp a performance on the stage where everyone remembers. Photograph: Tommy Dickson/INPHO

A Catch 22 is defined as a problematic situation for which the only solution is denied by a circumstance inherent in the problem.

Play well for Leinster and inclusion in the Ireland squad is guaranteed. Become a Leinster regular and Ireland caps follow with the cost being your availability to Leinster.

This paradoxical scenario shows knows sign of abating so Leo Cullen and Stuart Lancaster are tasked with coaching towards a stated goal within and despite a vacuum.

If the metric for success in Irish rugby, at provincial level, is winning trophies in May then we have created the wrong model.

If that’s the public demand the only option is private investment whereby current wage structures are blown to smithereens.

That’s an unsustainable plan in the current or future, market.

Supporters need to look at what has come through this season, and I think they do, they need to see the arrival of Dan Leavy and Jack Conan, Joey Carbery and Luke McGrath. From an IRFU perspective, these players represent enormous growth.

That Leinster team, at its core, was 11 years in the making. We always produced outstanding victories during the regular season but come the knockout rounds there would be a stumble.

Not unlike the Leinster performance we saw last Friday night. Then, like now, there has been growth in most areas; we tended to dominate the group stages or take a big scalp in France, and still we would find away to end the season shy of our stated intention. Trophies.

Future success needs to be built upon Friday’s performance.

Afterwards, Leo Cullen mentioned the 2003 defeat to Perpignan. I think this group is further down the track but it’s a good starting point.

The Leinster players that beat Leicester in the 2009 final were hardened by continual failures; they was a mix of ages with the majority of key figures at their peak. That team had collectively arrived at a point of instinctive performance.

There is a higher standard ahead for this current crop and, after Friday, they should realise the right to become that sort of team must be earned.

When we fall, we get back up and Leinster will probably need to fall a few more times before winning another trophy.

The problem with success – like, say, three European titles in four seasons – is it breeds expectation. Munster players would take your arm for the Pro 12 title, and their supporters expectations appear to have been readjusted by the reality of exactly how hard it is to return to the 2006-08 era, never mind compete, as they have done this year, in the Champions Cup.

At no stage do players lower their drive for utter perfection but their destiny is not always controllable. The Scarlets hit a better collective note, applying smart pressure as Leinster attacked the way they have done all season.

Leinster continually aimed for gaps that needed their season-long accuracy to penetrate. They could have kicked in behind more but who can blame a player for backing his skillset? The Scarlets bet on this scenario too.

Isa Nacewa and Leo both noted how much space they could see in the back field. Give Leinster the game back again and I believe they would control momentum, tweak the tactical approach but remain true to their ethos. On another day, as a result of this experience, the unheard messages will sink in.

But if winning a trophy is the only measure we judge Leinster by then we have the wrong model in place for that to be a realistic expectation every season, even if it is remains their stated goal both internally and publicly.

It has to remain this way, the Catch 22 must exist, because winning a trophy is every player’s North Star. And funnelling these players into the Ireland team remains the IRFU policy (above all else).

This need not be a stick to beat the provinces after losing semi-finals. Maybe next season this return will not be deemed acceptable but let’s see who survives the Lions tour. Let’s see how Leinster show up in September.

Regardless, an improvement looks the most likely scenario.

There will always be a constant stream of mitigating circumstances beyond Leinster’s control. Cullen and Lancaster are operating inside a set-up whose primary value is to make Ireland successful at Test match level.

And it can’t be underestimated how difficult it is to compete on two fronts. A club needs access to 50-60 players, while striking a balance between the young and experienced player.

Even the mighty Saracens stumbled over the weekend. The Pro 12 is getting tougher and the new European qualification measures from next season will strengthen it again, while the Champions Cup is physically and emotionally draining. Never mind how the players feel on return from the international windows in Carton House.

Did these Leinster kids see the Scarlets waiting in the long grass?

Probably not, but now they will be wiser for it. Experience counts.

The game was crying out for a Cullen or Seanie O’Brien. An old man’s voice, someone to take control, to co-ordinate the building of a score brick by brick.

Or just someone to set the emotional intent.

Next season Scott Fardy arrives. The veteran Wallaby must replicate a standard set by Rocky Elsom then maintained by Nathan Hines and Brad Thorn.

That said, the leadership group added Ross Molony and Luke McGrath this season. Wait until the next time Leinster are in this sort of mess. Leadership can only be learned. They will be forewarned.

Scarlets could target this game from miles out. When you are using 50-plus players in a season, it really does become a week to week focus.

This is not Leinster’s burden to carry all by themselves. The seemingly unbeatable Saracens suffered a similar shock against an efficient Exeter team. An old lesson relearned; there’s always a hungrier team than the champions.

Munster’s stride towards a truly great season was also forewarned by Leinster’s defeat. Taking note, they strangled Ospreys into submission on Saturday before a sensational try from Francis Saili (a player they can no longer afford).

Tyler Bleyendaal is going nowhere and he played well back alongside Conor Murray but he has struggled in some matches this season.

Granted, it is his first season as the Munster 10 but the Pro 12 final offers an ideal opportunity to extinguish any concerns about his big game temperament.

Not unlike Beauden Barrett – who followed Bleyendaal up through New Zealand’s underage ranks – when on song, when the Munster pack are following CJ Stander and Peter O’Mahony over the ball, everything flows off his boot or from his hands.

When put on the back foot, as Saracens highlighted more than any other opposition, it requires a different sort of performance, more composed, Bringing players that could be on the edge firmly into the game.

One of the best outhalves

Those days, operating in reverse, are when an outhalf earns his stripes. Even when the packs are breaking even, when only slightly on the black foot, that’s when the outhalf must shine.

Stephen Larkham was one of the best outhalves to ever play the game because he was rarely on the front foot for the Wallabies against New Zealand or South Africa yet he remained so influential with the scraps of possession that came his way. Larkham’s Wallabies won games they had no right to. So did O’Gara’s Munster.

Bleyendaal has done well this season but now, on Saturday, he’ll be asked to close out a final, to stamp a performance on the stage where everyone remembers.

His young Leinster counterparts still have to earn that right. We know Stander, O’Mahony and Murray will show up and inspire Munster.

Bleyendaal needs to shut down the show.

Do that and a trophy will be delivered. Not that we can be measuring the success of Irish rugby on that alone. But, after everything that has transpired since Axel’s passing, if any team deserves to end this season with tangible success it is Munster.