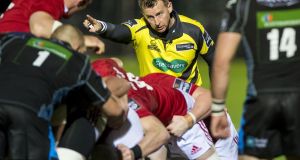 Nigel Owens: generally recognised as one of the best referees of his or indeed any other generation.

What do Leonardo Da Vinci, Vincent Van Gogh, Michelangelo and Claude Monet have in common with modern rugby players, and specifically those who populate the front row?

They all liked or like to ‘paint good pictures,’ the great artists on canvas while the rugby players are more concerned with the visual image they portray to referees when it comes to scrum time.

It’s a difficult and contentious area to officiate, deciding who did what to whom, and the interpretation can vary from referee to referee. It’s not just the scrum as the breakdown contains so many variables and, for the most part, multiple offences.

The one thing players look for in a referee is a consistency of interpretation. Munster take on the Scarlets in the Guinness Pro12 final at the Aviva Stadium on Saturday and it’s fair to suggest both teams will enjoy the fact that Nigel Owens will preside over the match.

It’s not merely ascribing sentiment but backed up by statistics. Owens is one of the best referees of his or any other generation. He communicates clearly, with authority and possesses a genuine commitment to establishing a natural flow to a game. His officiating style is well known to both teams, whom he has previously refereed on four occasions each this season.

The Welshman has taken charges of more Munster matches this season in the Pro12 than any other referee.

Munster have a 100 per cent record when the Welshman has been in charge during the league part of the current campaign, two of which were one-point victories over Ulster (Kingspan Stadium) and the Glasgow Warriors (Scotstoun), a comprehensive win over Leinster at Thomond Park and a three-point success against Glasgow in Cork.

The Scarlets have won three of their four matches when Owens has been refereeing, against Cardiff and the Ospreys in Parc y Scarlets and the Dragons in the Principality Stadium. The match they lost was a 45-9 thumping by Leinster at the RDS, a reverse they avenged in great style during last weekend’s semi-final win at the same venue.

So far, so superficial but drilling down a little reveals some interesting statistics, that may be more germane to the outcome on Saturday. In three of Munster’s four wins under Owens, they have been penalised more often than the opposition as the graphic illustrates.

They conceded seven to Ulster’s five, seven to Glasgow’s three and nine to Warriors’ seven in the second match between the teams. Only in the Leinster game did Rassie Erasmus’s side give away fewer penalties than the opposition; five against Leinster’s seven. Thus Munster have conceded 28 penalties this season, at an average of seven per game, when Owens has had the whistle.

Scarlets in contrast, despite losing one of the four games, have always conceded fewer penalties than the opposition, four against six for Cardiff, three against seven for Leinster, seven against 12 for the Dragons and six against 10 for the Ospreys.

Wayne Pivac’s team have given up 20 penalties in those matches refereed by Owens, at an average of five a game, two less than Munster. What’s also interesting is that the Scarlets have forced the opposition to concede a whopping 35 penalties, 15 less than their cumulative figure (20), while Munster have given away six more (28) than their opponents (22).

So will Munster maintain their unblemished victory record under Owens in the league this season?

Will the Scarlets continue to concede fewer penalties than the opposition and will it be good enough to ensure victory as hasn’t always been the case?

Saturday will reveal all.