The Lions tour: A money-making pursuit ‘since 1888’

Warren Gatland: ‘Keeping me busy at the moment is looking after all the sponsors’ 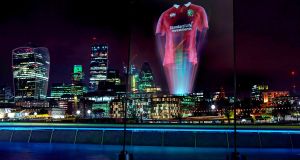 The launch of the official jersey that will be worn by the British & Irish Lions players in the 2017 Tour to New Zealand. Photograph: Getty Images

Regardless of what is on the menu at London’s Hurlingham Club, it will not match the delicious irony served up a week next Wednesday. It is an evening with the “Cambridge University Big Cats” and, if the billing sounds contrived, it is because the British & Irish Lions have instructed them to drop “Lions” from the title.

Quite apart from the fact that Cambridge have provided the Lions with 73 tourists over the years – more than any other club – among the legends due to be present is John Spencer, who happens to be manager of this summer’s tour of New Zealand. It would not be surprising to hear of him making a swift exit after dinner.

If it seems like heavy-handed ring-fencing, the Lions would point out that their brand is a shooting star – every four years it burns brightly but not for long – and that they have a duty to their sponsors. They also have charity dinners to sell out themselves and the next is in Edinburgh the day after Cambridge’s – a seat is yours for £249 (€293). It raises the question of whether the Lions as a brand has jumped the shark. As a commercial product, has it become a monster?

No tour before 1991 made a profit but since the 2009 trip to South Africa – with HSBC as the marquee sponsor – it has increasingly become a cash cow to be milked. Standard Life Investments has replaced HSBC, whose estimated £7m sponsorship in 2013 contributed to a profit of around £6m. In total there are 11 major backers – Doom Bar was this week announced as the official beer of the Lions – and during the Six Nations the head coach, Warren Gatland, even admitted: “People will be amazed that the stuff that is keeping me busy at the moment is looking after all the sponsors.”

The reasons for Gatland’s schmoozing duties are clear. The Lions is a subsidiary of the four home unions and sponsorship accounts for considerably more than half of its income. In the past the unions, who split the profits made by the Lions, have lamented a TV deal whereby the host nation keeps all the revenues from the sale of the domestic rights.

The Lions all the while have continued their lucrative contract with Sky Sports in the UK but, with the domestic TV deal playing its part, the Australian Rugby Union banked an estimated £40m from the 2013 tour and was able to wipe off a £12.2m debt.

The New Zealand Rugby Union has not revealed how much it expects to make this summer but in 2005 hosting the Lions reportedly earned the NZRU £12m. The 20,000 travelling fans also led to an estimated £65m windfall in foreign exchange gains and an economic boon of £140m to the country’s tourism. Those figures are expected to be even higher this year.

The New Zealand tourist board, meanwhile, is expecting 35,000 visitors from the UK this time while the decision to host two Tests in Auckland was evidently made to boost ticket sales – Eden Park is comfortably the largest stadium in the country and as a result a near identical number of tickets are available as in 2005 despite the Lions playing a match fewer. As one New Zealand journalist put it recently, “The Lions practically defecate money.”

The hotel industry in New Zealand is also approaching breaking point. Most rooms are sold out in host cities, while some accommodation is available on Airbnb for as much as £670 a night in Wellington, where hotels are fully booked on the night of the second Test. Indeed, it led one supporter, Adam Gilshnan, to set up the Facebook page, Adopt-a-Lion, urging his compatriots to put up travelling fans for free with the added offers of “rugby bbqs”, “banter and beer”, “tours of local breweries” and “home-made lager”.

Gilshnan’s goodwill aside, the economic benefits for the host nation make the tour schedule this year all the more egregious. Why the Lions could not flex that financial clout to strong-arm New Zealand into agreeing to host the tour later in the summer is a mystery. The tour manager in 2013, Andy Irvine, described a situation where the plane left less than two days after the domestic finals as “ridiculous” and yet, as it is part of the current agreement that expires after this tour, nothing has been done about it. If the tour was later the home unions would be due more compensation – they currently receive £70,000 per player for their absence from their summer tours – but Premiership Rugby reportedly dug its heels in, unimpressed by the prospect of the players returning in late July.

The players themselves are at least well paid – they will receive £70,000 should they finish the tour and there is also a hefty win bonus available – but it is ludicrous that, while trying to claim a first series victory in New Zealand since 1971, they should be embarking on a five-week, 10-match series immediately after a long season.

It also short changes the tens of thousands of travelling fans. Being a supporter on the tour does not come cheap. All Blacks Hospitality is selling packages per Test, ranging from £340 to £9,200, while the Lions themselves offer trips for as much as £15,799 for a 39-day stay. Of course there is an element of supply and demand. If supporters are willing to pay through the nose, then the vendors cannot be blamed for charging those prices. And as far as the Lions are concerned, those packages are a significant contributor to their income. Lions tours cost approximately £14m to finance and the £1.5m each home union received in 2013 pales in comparison with what the NZRU will bank.

If that explains the rampant commercialism, it does not necessarily excuse all of it. A quick look at the array of merchandise available in the Lions online shop shows that a tie from Thomas Pink (one of those 11 sponsors) costs £69.99. The Lions jersey is matched perhaps only by New Zealand’s in terms of iconic status and there will be seas of red at each of the 10 matches this summer. Those jerseys retail at £70. Closer inspection of the jersey also reveals that the logo now bears the words “since 1888” rather than the location of the tour – a change brought about after a brand review in 2013.

It was in 1888 that the first Lions tour set sail for Australia and New Zealand aboard SS Kaikoura. It took 42 days to get there and the squad were away for more than eight months, playing 35 matches and losing only two. It was also the brainchild of three of the most prestigious cricketers in England and it was unashamedly a money-making pursuit. So much has changed since 1888, yet some things remain exactly the same.