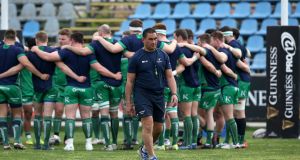 Pat Lam has made seven changes to the Connacht side which were beaten last time out by Zebre for Friday night’s trip to play Edinburgh.

Among those returning to the fold are Ireland’s Kieran Marmion and Tiernan O’Halloran, with the latter set to make his 100th Pro 12 appearance.

Niyi Adeolokun is fit again and returns on the wing, while Steve Crosbie will make his second start at outhalf. Eoin Griffin joins Bundee Aki in midfield.

Up front Finlay Bealham is replaced by Dominic Robertson-McCoy in the frontrow, with Quinn Roux and Andrew Browne in the engine room.

Ahead of the fixture at Myreside, Lam said: “This is our third away game in a row and after last week’s game in Italy, we have an opportunity to produce a performance we can be proud of.

“Although we have been creating numerous opportunities to score, it is all about making sure we take those chances tomorrow night.

“Edinburgh are always tough, physical opposition and we are looking forward to a big challenge on our first visit to Myreside.”