Confident Leinster aiming to finish on a high 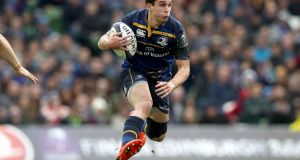 Ulster are in miracle territory, needing a bonus point win over the free-scoring Guinness Pro12 leaders while hoping the Ospreys obtain nothing from their meeting with the Scarlets, and in the process also making up a 73 point differential. Now 500/1 shots to win the League, perhaps realistically they appear to have given up on the miracle in advance.

Curiously, though as suspected might be the case, none of Ulster’s trio of Lions will appear in the province’s final league game of the season, as Rory Best, Iain Henderson and Jared Payne are all rested. This means that they will board the plane without a game in four weeks or, in Payne’s case, seven weeks.

The Lions’ 41-man playing squad and back-up staff are assembling in Syon House in London on Monday for their “administration day”, but the first of the two pre-tour training camps is not until the following week in the Vale of Glamorgan. It’s doubtful in the extreme that the Lions would therefore have asked the trio be rested. Go figure.

Rob Herring and Roger Wilson – Ulster’s most capped player who will be making his 221st and last competitive appearance for the province – come in for Best and Henderson, and Rodney Ah You replaces Wiehahn Herbst, who was initially named on the bench but has been ruled out with a knee injury. The backline remains unchanged.

Adding to the poignancy, and one suspects mixture of frustration and anger amongst a packed house for this otherwise anti-climactic finale, Ruan Pienaar will make his 141st and last competitive appearance for Ulster in light of the IRFU’s decision not to sanction his and Ulster’s wish that he remain with them after seven stellar seasons. He says he has been dreading this day.

A return of three points from their last three winless games, culminating in last week’s somewhat toothless and error-strewn effort in Swansea, has effectively ruled Ulster out of the play-offs for the first time in five years.

By way of stark contrast, and despite also reaching the semi-finals of the European Champions Cup, Leinster have secured a home semi-final for the seventh time in eight seasons. They arrive here on the back of a ten-game winning streak in the League dating back to their 22-7 win over Ulster on New Year’s Eve at the RDS.

Throughout this time they have seamlessly rotated their resources, underlining that Leinster not only have probably the best team in the League, but assuredly the best squad.

They have made 11 changes from the team which beat Glasgow last weekend, with Luke McGrath and Joey Carbery returning at half-back, as do Noel Reid and Garry Ringrose in midfield, and Isa Nacewa at fullback.

Up front, Lions props Jack McGrath and Tadhg Furlong are recalled, as are Devin Toner and Hayden Triggs in the second row, as well as Rhys Ruddock and Jack Conan in the backrow. Ruddock replaces Dominic Ryan, who suffered a bicep injury last week during what now seems like a try-scoring farewell appearance.

Ulster and Leinster don’t tend to do dull, least of all in a packed Kingspan Stadium, where Ulster have lost only twice this season (to Munster and Bordeaux/Begles) and have their pride on the line. This fixture has been sold out for three weeks, and amongst the crowd will be former captain Johann Muller.

Leinster would assuredly like to retain top spot and have selected accordingly. They’ve also had something of an Indian sign over Ulster in latter years, having lost only two of the last ten meetings, and bring more freshness, confidence and attacking cohesion into this clash.

Clare ease into action with 16-point thrashing of Carlow 18:03
Kilkenny give an early glimpse of their power to see off Dublin 17:53
Five-star Mark Wood sets England towards Wanderers win 17:45
John Heslin strikes at the death to see Westmeath past Clare 17:35
Man United find respite in the mud as they hit Tranmere for six 17:32
Here is your handy guide to sport on television this week