The healthcare chaplain ‘God destined him to be’: Fr Gerry Byrne 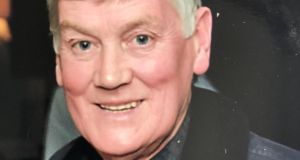 Fr Gerry Byrne “related with a winning smile and generously shared himself with patients of all faiths and none, their families and staff”.

Meg Burton, in an editorial last year for the Health and Social Care Chaplaincy Journal, said of chaplaincy: “Primarily we support patients, visitors and staff, by listening to the words, the body language and the silences.”

The core and heart of healthcare chaplaincy continues despite the necessitated precautions of Covid-19. An element of anxiety and fear accompanies most people being admitted to hospital. Packing a hospital bag is a different feeling from packing for a holiday.

Healthcare staff want the best for their patients and try to set them at ease from the moment of admission. The reassuring smile, the caring look, the welcoming voice are all filtered and distanced by PPE. To quote one chaplain; “I now know how hard it is to sustain eye contact and a calm voice when you are impeded by goggles and a mask.”

Like all hospital specialities, healthcare chaplaincy has adapted new ways of thinking and practising. The role of such chaplains, while always essential, is even more valued during this time of unprecedented distress and uncertainty. Chaplains provide a connection between the patient and their families.

Connecting through Zoom and FaceTime for pastoral conversations, for prayer and sacraments and final rituals at the bedside, is no substitute for being present, holding a hand, wiping the brow, touching the cheek and providing loving reassurances.

Virtual chaplaincy, alongside the relaying of services through a designated television channel for guided prayer, meditation and reflective music from the hospital chapel, is helpful but can never be a substitute for the face-to-face and community solidarity.

Healthcare chaplains help families and friends of deceased patients with the “different” Covid-19 funeral. Preparing families for such restricted funerals that lack the physical community support of presence, comforting touch, home visits and exchanging memories is no substitute for being there.

After a lengthy and brave battle with cancer Fr Gerry Byrne had one such funeral on May 29th last. Having worked for 34 years at the Blackrock Clinic in Dublin he was one of Ireland’s longest-serving and best-known healthcare chaplains. Previously he had been chaplain at Stewarts Hospital while curate in Dublin’s Palmerstown parish.

Fr Gerry died peacefully surrounded by his sisters Breda, Mary and his twin Jane at the family home in Balbriggan, Co Dublin.

Reflecting on his 41 years of priestly ministry takes us to the core of healthcare chaplaincy. In his early years of ministry he was diagnosed with multiple sclerosis, masked by trigeminal neuralgia for which, despite risks, he insisted on brain surgery.

He adopted a motto: “You can’t stop the waves, but you can learn to surf.”

Having studied for healthcare chaplaincy he discovered his unique personal qualities of compassionate listening, of connecting and loving unconditionally.

Fr Gerry related with a winning smile and generously shared himself with patients of all faiths and none, their families and staff.

He was a kind, empathetic presence, getting up at all hours of the night to be with patients perhaps fearful or searching and to be with families during the final hours. Patients from all walks of life thought so highly of his pastoral care, his authentic and gentle faith, his integrity and sense of humour.

Fr Gerry cared for generations of staff, regardless of their role at Blackrock Clinic. They and their families were his priority at times of special need or crisis. As a member of the multidisciplinary team he would often say: “We can only be a team if we care for one another.”

The measurement of Fr Gerry’s life is best described in biblical terms: “a full measure, pressed down and overflowing”.

He was was well known for his walks around Monkstown and on Dún Laoghaire pier. In recent years with Ned, his Tibetan spaniel, his circle of friends widened to include the “dog walkers”.

Early-morning strolls were often preceded by swimming at the Forty-Foot, where again his personal magnetism added to his circle of friends.

Living with illness for most of his life, Fr Gerry drew his sensitivity on to a higher level; his understanding of pain, fear, loss and facing the unknown were second nature to him.

What initially was seen as a cross enabled him to dig deep, draw out resources he previously was unaware of and become the healthcare chaplain that God had destined him to be.

He would want any tributes paid to him be transferred to healthcare chaplaincy, a ministry that gave his whole life and priestly ministry purpose and meaning.

As a tweeter posted at his death: “Chaplains have a relentless job, they see people vulnerable and desperate. Gerry wore that burden so lightly. Countless people knew the loving care he offered.”

Fr Gerry’s faith-filled compassionate pastoral care will be remembered by all who encountered him.