Peter O’Mahony ready to stand tall as Taute ruled out

Despite some missing men, Munster’s captain is ready to lead by example once again 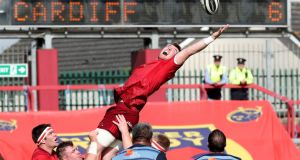 The news that Jaco Taute will be sidelined for six months is another huge blow for Munster. The South African is their defensive lynchpin, and no sooner had he departed during last Saturday’s win over Cardiff with the knee ligament damage which will now require surgery, than their defensive shape narrowed and was exploited by the Blues.

The 26-year-old is expected to follow a rehabilitation programme for approximately six months, ruling him out of Munster’s entire European Champions Cup and well beyond. Some positive news has come with Rassie Erasmus yesterday intimating that Keith Earls could make a delayed seasonal re-appearance against Leinster at the Aviva Stadium on Saturday, while Jack O’Donoghue is available after completing his return to play protocols.

Jean Kleyn is also “progressing well” following the neck injury he sustained in the defeat to Glasgow 11 days ago, as is the case with academy lock Sean O’Connor.

Munster’s secondrow options are limited following the departure of Donnacha Ryan to Racing 92, with the injuries to new signing Gerbrandt Grobbler (knee) and Kleyn being compounded by the three-game suspension handed out to Academy lock Fineen Wyncherley.

So it was that Mark Flanagan was signed on loan from Saracens, raising the prospect of the ex-Leinster lock coming up against his cousin, Devin Toner, next Saturday. Robin Copeland has also been converted into a lock, while in the longer-term Munster yesterday confirmed the signing of another Leinster second-row product, Tadhg Beirne, from next season. Beirne was outstanding in the Scarlets’ win over Munster in last season’s Pro12 final.

In the interim, the shortage of locks heightens the importance of Peter O’Mahony’s supreme line-out skills, as well as his inspiring leadership, ball-carrying, defending and poaching. One ventures he will again be one of Munster’s rocks this season.

From the outside, with Erasmus set to depart in December and a replacement to be named in the interim, it may seem as if Munster are in a state of chassis. But modern-day professional rugby provinces or clubs are just that.

“It’s a professional sport. These things are going to happen and a lot of the players who are there now, they’ve been through this before so all we can do is put our heads down and train hard and listen to the feedback. Change happens and the new guy’s going to come in and do his thing, and we’re all going to row in behind that. So as I sit here now there really isn’t a difference from last year.”

Indeed, it was just under a year ago when their long-time team-mate, head coach and friend, Anthony Foley, passed away suddenly, and Munster responded magnificently then, topping a pool that contained Racing, Leicester and Glasgow. They are again pitted with Racing, second up at Thomond Park on Saturday week in a game that, along with January’s return trip to Paris, is sure to evoke memories of last season as well as a renewal with Ronan O’Gara and Ryan.

For the third campaign in a row they will also meet Leicester in the December back-to-back rounds; Leicester having avenged a 38-0 loss in Thomond Park a week later in Welford Road, after completing the double over Munster the year before.

Initially, Munster are away to long-time foes Castres, traditionally more dangerous early on, and who beat Clermont last Sunday 29-23 at home to stand tenth in the Top 14.

It’s also easy to forgot Erasmus’ famous quip at last season’s European Champions Cup launch that when looking for the outsiders in their pool, he realised it was Munster who best fitted that description.

“People probably had a right to underestimate us this time last year, we were struggling,” admitted O’Mahony. “We came sixth and scraped our way into Europe and I wouldn’t have begrudged people for underestimating us, because they were right to. But I knew there was a big season in us. I believed that [the previous season] wasn’t us, and we performed relatively well last year.”

Ultimately though, last season’s campaign finished with a semi-final defeat in Europe and Pro12 final defeat, both at the Aviva Stadium. “We got a good lesson from Saracens and a good lesson from Llanelli at the end of the season. You have to take those lessons on the chin and keep them in the bank and build on last year.

“The mood is ambitious, positive. Guys are enjoying training, we had a great pre-season. We enjoyed last season as much as we could. We learned a huge amount rugby-wise and learned a huge amount individually about ourselves. Probably a lot of guys had to do a lot of growing up quite quickly last year and you need to make that kind of stuff stands to you; not just rugby, but on all sides.”

“We’d a lot of experiences last year with Axel, the European side of it. Things you shouldn’t have to deal with that we did have to deal with. We reached the semi-finals of both competitions, and a final. I got a [Lions] tour out of it. You’ve got to take from all of those experiences and hopefully I can bank them.”

Indeed, the summer tour saw him captain the Lions in the first Test, only to miss out on the second and third. “I’m very proud, hugely proud of captaining the team, and I think I carried myself as best I could afterwards. You’re invested at that stage. You’ve opened yourself up to a group of guys you don’t really know. All you want to do together is just win. I trained as well as I could the last two weeks. You’re just trying to get the lads to win. Obviously I’m disappointed we didn’t win, but that’s part and parcel.”

With typical pragmatism, he parked his personal disappointment in the last two weeks. “You can only be that way for a few minutes, there’s too much else going on. You can’t be around a tour like that and feel sorry for yourself. To do that is unbelievably selfish and that’s not what rugby is about. Obviously you’re gutted inside for ten minutes, then you get on with it. That’s rugby.”

Next up Leinster at the Aviva. Talk about having to hit the ground running. “Every provincial game is a step up in intensity,” says O’Mahony. “There is certainly a difference between Europe and the Pro14, and to bridge that this is the perfect preparation; the intensity Munster v Leinster has, the quality there, the rivalries, playing against friends. It’s a great one to ramp up into Europe.”