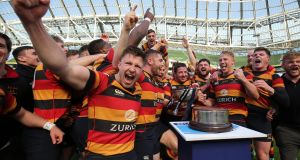 “I was a bit slow at the start,” smiled Peter Dooley. “The warm weather didn’t help and carrying around a big frame. Tough slog but Mike (Ruddock) has had that faith in me for a good few years now - he left the three of us in the frontrow to stick it out. The scrum penalties in the end paid dividends. Got us good field position at crucial times in the match.”

The scrum, anchored by Dooley with Tyrone Moran outstanding at hooker, especially when bulldozing over for the winning try, and captain Ian Prenderville equally effective, proved the winning of this final.

With that Lansdowne stripped Cork Constitution of the Ulster Bank All-Ireland League title.

Dooley was so clearly the dominant physical specimen on view. That’s saying something because no man avoided conflict. Con number eight Luke Cahill was typically superb while their big lock Conor Kindregan made a heroic contribution late on that his teammates failed to turn into a winning score.

“This was a great chance for Peter to show Leinster what he is capable of doing,” said Lansdowne coach Mike Ruddock. “There were a lot good players on show today but I thought he was head and shoulders above everyone really.

“He was like superman out there - making breaks, knocking guys off, making big tackles, turning the ball over. It was quite a phenomenal performance.”

Dooley, who sits fourth in the Leinster queue behind Ed Byrne, having turned down the opportunity to join Munster last season, looked every inch the 23-year-old prop who’s been breaking bread with Cian Healy, Jack McGrath and Tadhg Furlong day in, day out for several winters.

What was abundantly clear is the Offaly native has become too powerful and technically superior for the amateur ranks. He may end up playing for Leinster A in Belfast.

The scrum carpet-bombed Cork Con’s title defence but Scott Deasy piloted the mission. A Con boy at heart, the 29-year-olds’s extra bit of class and accuracy, when compared to Tomás Quinlan, who blinked first and second, ultimately proved the difference.

No room for error in a two point game.

That’s Lansdowne 2-0 Cork Con in finals this season - they also relinquished the Bateman Cup to them - but this proved a genuine struggle with Quinlan and his pack settling quicker under the scorching sun to coast into a 9-3 lead.

Adam Leavy, a rapid version of big brother Dan, was the first three-quarter to carve a path into open grass. A few phases later Deasy made it 9-6. Next, Dooley began his Healy impersonation with a rumble down the left flank but some sloppy distribution slowed Lansdowne’s push for a score.

Still, they turned around all square when Deasy again found the target after a high tackle by Cahill.

The scrum advantage saw him give Lansdowne a 12-9 lead but Con responded with a power surge of carries that ended with lock Brian Hayes soaking Leavy’s tackle and stretching over.

Quinlan missed the conversion but he did make it 17-12 on 57 minutes.

Here’s when Lansdowne dug deeper. Deasy converted Moran’s brutish try while Quinlan missed with a penalty well inside his range on 67 minutes.

Cork Con were not spent but for every courageous moment, like the Joseph McSwiney turnover, error followed, like costly knock ons by Alex McHenry, JJ O’Neill and Shane Daly at the finish.

No more points to report but Dooley’s clean rip off Ger Sweeney, two scrum penalties and the sight of the prop tracking down Cahill in the 80th minute guaranteed the man of the match award.

“That’s why you train every day, you want to play in days like today,”

Dooley added on the sunny side of the pitch as roars drowned out his words. “This is why you play rugby, in the Aviva...”

He bounded away for the team photo. They won’t, or certainly shouldn’t, have him posing with them next season. Nothing new for Ruddock.

“We won the league a few years ago and lost 13 players. We had to rebuild. Don’t forget James Ryan and Max Deegan were playing for us in this league a couple of years ago. Tadhg Beirne played for us in the last final. There are good players in this league who can kick on and become pros.”

And those living in Dublin tend to join Lansdowne FC.

“Cork Con won the double last year so they have so much intellectual property when it comes to staying calm and winning under pressure,” added the former Wales coach. “So that was a big step forward for us against a very street wise and well coached team.”