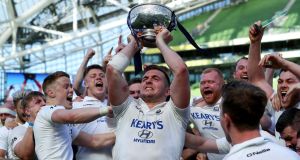 Cork Constitution’s Niall Kenneally and team-mates celebrate the Division 1A final victory over Clontarf at the Aviva. Photograph: Bryan Keane/Inpho

Last weekend Cork Constitution retained the Cork Charity Cup – one of four trophies they won in a remarkable 2016-2017 season. They also triumphed in the Munster Senior Cup, the All Ireland Cup and the Ulster Bank League Division 1A final.

It’s a prestigious collection, the only downside the industrial quantities of Silvo required to keep the trophies in pristine condition.

On Saturday week Con begin their defence against the team they beat in last season’s final – Clontarf, and the Cork side will once again be led by centre Niall Kenneally.

Rory Burke has left for English Championship side Nottingham RFC, while former underage international scrumhalf John Poland has made the shorter journey to the Mardyke to play with UCC but that is offset by a few new additions to the squad including scrumhalf Gerry Hurley, who returns from a professional career in France.

Paul Barr, an assistant to Brian Hickey last season, has taken a step back and is replaced as backs’ coach by former outhalf Johnny Holland who unfortunately had to retire from professional rugby at 25 following a serious hamstring injury last September.

Kenneally smiles when asked about the secret of the club’s success, pointing out that there was no magic formula other than concentrating on winning every Saturday because to focus on anything other than short-term goals was a fool’s errand. He is also a passionate advocate with regard to the quality of rugby in the league .

“There is no gap between top and bottom [teams in the league]; everyone beats everyone. You couldn’t bet on this league because it is so unpredictable. I have been saying it for years that the standard in this league is hugely underrated.

“If you were new to rugby and you came to a game on a Saturday, with a team in the AIL there might be three or four professional players (playing); often you would struggle to pick them out.

“Sometimes you might get it wrong and pick other players out. That’s a testament to where the standard is in the league. There are fantastic games. With the rise of the four provinces in this country, the casual supporters would have switched from AIL to supporting the provinces. The standard of the AIL hasn’t fallen.

“It’s basically a semi-professional league without the money. You have guys who are training every day whether it be in the gym or on the pitch. There is a lovely mix in the league, guys on the verge of professional sides, pushing to get into them, some guys who are in professional set-ups playing for their clubs and then you have a couple of guys who are club players.

“Some of these guys are gauging themselves against the professional players and going, ‘I am just as good as these players’. And they are; it’s true. All of that blends together to form a competitive mix within teams and between teams in the league.”

Kenneally suffered what he described as “the disappointment” of being released from the Munster academy in 2014. He is definitely good enough to play professional rugby but players also require some collusion between circumstances and good fortune.

“I suppose the timing wasn’t great. [Former Munster head coach] Rob Penney would have been involved when I was brought in. Then when it was my time to graduate from the Academy, Penney was out and the new management team at the time then took charge of recruitment. Maybe the wouldn’t have seen the same amount of me as the previous administration did.

“The alternative option then was to go and ply your trade somewhere else. There were options on the table in France and the Championship. I suppose I would have been 23/24 at the time and I decided just to focus on my career. I’m doing a Masters in structural engineering. I was able to get my competitive fix of the rugby playing with Con and by playing at a high level.

“When you don’t get one of the senior contracts, there is no doubt about it, you honestly do feel disappointed. Especially when you feel that you could have performed at that level and possibly had performed when you had been given the opportunity.

“I was disappointed that it didn’t work out at the time but I have to say, I’m really enjoying where I am at the minute both with the rugby and the other side of it.”