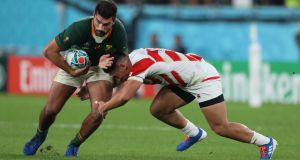 Munster have confirmed that their entire squad have embarked upon their summer off-season for the next three weeks.

This would put them in line with a return to training, and what amounts to a pre-season, on Monday, June 22nd, which would be nine weeks in advance of a resumption of the 2019-20 Pro14 season and their proposed game against Leinster behind closed doors at the Aviva Stadium on Saturday, August 22nd.

A statement from the province has said the squad have completed their remote training programme and will be on their off-season for the next three weeks.

“Last Thursday saw the 2019/20 squad meet remotely for the final time with eight players departing the province. Sammy Arnold, Tyler Bleyendaal, Arno Botha, Seán O’Connor, Darren O’Shea, Conor Oliver, Ciaran Parker and Brian Scott all made a valuable contribution and we thank them for their time at Munster.

“Irish Rugby’s ‘Return to Train and Play’ proposals were submitted to Government last month. Based on this phased road map, Munster will return to action with a Guinness PRO14 Interpro derby on the weekend of August 22 behind closed doors at the Aviva Stadium.”