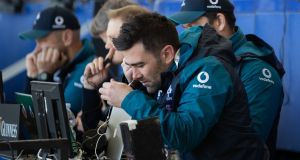 The event is spearheaded by Vinny Hammond, the IRFU’s head of analytics and innovation. Photograph: James Crombie/Inpho

Rarely does a sequel surpass the original, but part two of the Analytica Zoom conference is rolling out Irish rugby’s leading men.

But top of the bill on Thursday is Ireland coach Andy Farrell telling Paul O’Connell how he dissects a game. Ideally, this chat concludes with an arm wrestle for the ages.

The event, to raise funds for Pieta House, is spearheaded by Vinny Hammond, the IRFU’s head of analytics and innovation, who was Johnny Sexton’s halfback partner during their days in St Mary’s College.

“People have been really good with their time because almost everyone has an experience or story to tell in this area,” said Hammond.

Pieta House provides professional services across Ireland for people at risk of suicide or self harm, and for those bereaved by suicide. Pieta’s Darkness into Light walk this month was postponed due to the coronavirus, resulting in a significant funding gap for the charity.

“We might get half these people if it was in the one room but the fact it is online allows us to put panels together from all over the world,” Hammond explains.

“We tried to structure it so it is not too nerd heavy - I can get lost in that because I love the science behind sport - so we have aimed for the middle ground of being interesting, relevant and not too heavy on numbers.

“It’s for the ordinary sports fan who wants to know more about the detail of games that doesn’t get a lot of mentions because it is considered a black box.”

Hammond has succeeded in this aim. The balance is struck by the main event at 3.15pm - entitled “The Review” - creating a discussion between Farrell, O’Connell and Dundalk FC manager Vinny Perth.

Last Thursday’s first session included some insightful comments from Sexton about his burning desire to keep playing into his late 30s - he turns 35 in July - along with a cameo from Dublin footballer Jonny Cooper.

Also, an interesting sharing of information by Manchester United’s head analyst Paul Brand and Giles Lindsay from England Cricket revealed a ban on mobile phones from Test match changing rooms due to betting concerns. Turns out this rule was also in place at the rugby World Cup in Japan.

The stacked list of Irish sporting personalities promises to turn Analytica into an annual gathering of elite athletes and their increasingly essential number crunching sidekicks.

The online conference works, especially these days, as it allows Rory Best to join Professor John Ryan (Leinster team doctor and head of Emergency medicine at St Vincent’s hospital) and Aer Lingus pilot Captain Caroline Curley in what could be a fascinating conversation under the banner: “When the gut takes over in decision making.”

Next there is a “data in the media” section led by Murray Kinsella before Jamie Heaslip joins Damien O’Donohoe (Ikon Talent agency) and Chris Chaney (EVL Interactive) for “The rise of the machines: E Sports and beyond.”

In the current climate E Sports is not the future of sport, it is sport. The $6 million prize money for Call of Duty tournaments in 2019 reflects the growing mainstream influence of gaming culture.

The conference goes live at 11.05am with a friendly discussion between members of the Lions and All Blacks backroom teams from the 2017 tour. This is followed by a rare but always educational sitting with Irish rugby’s head of athletic development Jason Cowman. For “bringing GPS and tracking data to life,” Cowman will be joined by David Sumpter (@soccermatics) and Sudarshan Gopaladesikan (Benfica’s head of sports data) to potentially explain how data gathering assists in player recruitment.

Sports nerd heaven. The Irish Times will be tuned in and taking notes. This being the closest we can get to attending matches, what else would be doing?

Registration capacity is limited and at a cost of €20 per person. All proceeds raised from this conference will be donated to Pieta House. Further details can be found at www.irishrugby.ie.