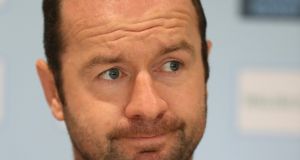 Dean Richards once dubbed Geordan Murphy the “George Best” of rugby. It is Richards who arrives to Welford Road this weekend with Newcastle Falcons to take the first cut at the former Irish fullback in his new role as Leicester Tigers coach, or as Murphy clarified on Monday, “interim coach”.

The “Best” comment has stuck with him as Murphy steps up to replace Matt O’Connor, who was sacked on Monday evening. The 47-year-old Australian and former Leinster coach departed 48 hours after the Tigers lost 40-6 at Exeter in their opening Premiership game of the season.

Murphy has always been a much-liked character for his easy-going nature and how cavalier he could be when he played rugby. He has also held a coaching role in the club for the last five years.

He won’t expect to shoulder the blame if the home game falls flat to his old boss Richards but he understands the consequences of failure at a club that demands success.

Murphy’s 16 years at Welford Road as a player affords him a deep understanding of the culture at the club. The question for the former player is if he has the temperament and mindset for the head coach position. Although he masterminded Tigers’ winning of the 2016-17 Anglo-Welsh Cup, the elevated territory of the Premiership will be more capricious and ruthless.

“Yeah, it’s been pretty busy,” said Murphy at the club grounds. “Quite a shock. Quite a surprise. There’s been a little bit of work to do over the last 24 hours. It’s been interesting .

“The boys have been very good this morning. We’ve got to take a little bit of the responsibility for it. We’ve probably let Matt down. The board have taken the decision. It’s not a nice decision. But it’s out of our hands and we’ve got to really focus on our performance this weekend.”

If Murphy is in doubt about anything in the coaching sphere he can turn to a glut of former Irish and provincial players, who have spread across Europe and elsewhere in various roles.

Some of Irish rugby’s greatest intellectual property exports are coaches with a few, Stade Francais forwards coach Paul O’Connell and Crusaders backs coach Ronan O’Gara, former World Cup team-mates. Murphy might also remember that when O’Connor was appointed in April 2017 it was, according to Peter Tom, Leicester’s executive chairman, “on the basis of his previous Premiership experience and his knowledge of the club”. Murphy’s skillset exactly.

“It’s really strange to be quite honest,” added the 40-year-old, who came into the coaching stream at Leicester as assistant backs coach in the 2013-14 season.

“Obviously a dream to be involved with the Leicester Tigers team, on an interim basis I know. That’s fantastic but to do it at the expense of a good friend and somebody who has mentored me as a coach and as a player is a very bitter pill to swallow.

“Very, very mixed emotions trying to keep those in check and try to do what’s best for the team on the field.”

There are at least 14 former players holding head coach, assistant (attack and defence) coaching, or director of rugby jobs in clubs around the world.

Girvan Dempsey is in Bath having left Leinster over the summer, while Conor McPhillips and John Muldoon are both at Bristol.

Former Ulster interim coach Neil Doak is attack coach at Worcester Warriors and Allen Clarke, who he worked with in Belfast, head coach at Pro14 side Ospreys.

Noel McNamara, coach of the Irish Under 20s, is unique and the only one who has no previous professional playing experience. The Clare man has been sent on a three-month placement with Kiwi club North Harbour as part of an IRFU initiative to take coaches “out of their comfort zone” and aid their development.

As equally exotic, former Greystones player Eoin Toolan was appointed over the summer as head coach of the Melbourne Rising ahead of the upcoming National Rugby Championship in Australia.

Formerly part of Ireland’s backroom staff, Toolan began working as an analyst for the IRFU in 2007 and became an assistant to Ireland’s head analyst, Mervyn Murphy the following year. He was previously an assistant coach for the Rising, essentially a feeder team to the Rebels.

Declan Kidney (London Irish), Mark McCall (Saracens) and Ian Humphreys (Gloucester) are all with UK teams and Conor O’Shea the only ex-player in charge of a national side, Italy.

From Kildare, Murphy has the added pressure, or, motivation of having made Leicester his home. He joined the club as a player in 1997 and played in 316 games. He has significant emotional investment in how the club fares.

1 Saudi Arabia-funded takeover of Newcastle United in serious doubt
2 Gerry Thornley: Home and away Six Nations could be its ruination
3 Decision expected next week on staging of College Football game in August
4 Kimmich floats Bayern past Dortmund and seven points clear at the top
5 Coming fourth in the Olympics didn’t change this fearless quartet, time did
Real news has value SUBSCRIBE