Secondrow partner: ‘He’s turning into that player we all knew he could become’ 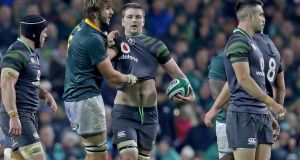 Iain Henderson has realised his potential as a true Test match “monster” for Ireland, according to lock partner Devin Toner.

The 25-year-old’s stunning muscle-flexing added another clip to his impressive highlights reel, but team-mate Toner insisted he is simply making good on a long-held promise.

“Iain Henderson’s turned into the enforcer he always had the potential to become,” said Toner.

“When he was coming through we didn’t call him the man-child for nothing, he’s a monster in the gym and a monster on the pitch.

“And it’s fantastic for Irish rugby that he’s turning into that player we all knew he could become.

“When you have someone who is the talisman of Etzebeth, he’s their captain, he’s renowned for being their physical man on the pitch.

“So when you see Hendy stand up to him and get the better of him, it’s amazing, it’s brilliant and it gives your team a real gee-up.”

Henderson now boasts 33 caps in five years, and can count himself unlucky not to have broken into the British and Irish Lions’ Test team in the summer’s tour to New Zealand.

“I think he’s evolved his game, he’s a lineout caller these days as well.

“So I’ll keep looking over my shoulder now to make sure he’s not nicking my spot.

“So I think when players give confidence to those around them, it’s a huge positive.”

Ireland racked up four tries in a record win over the Springboks, for whom head coach Allister Coetzee’s tenure appears on thin ice.

Munster wing Darren Sweetnam made his Test debut off the bench, and admitted now feeling fully vindicated in his switch from hurling to rugby.

Sweetnam forced his way into Cork’s senior hurling ranks as a talented midfielder in his teens, but then switched to rugby full-time in 2012.

The 24-year-old revelled in his Test bow for Schmidt’s men however, saying: “It was incredible, surreal. Growing up in Ireland all you ever want to do is get into a green jersey, so I was absolutely thrilled.

“This backs my decision going with rugby over hurling at the end of the day. I’ve never experienced anything like that.

“It’s five years now since I played in Croke Park, but both are incredible.

“I never thought I’d get a cap, I was so delighted.”