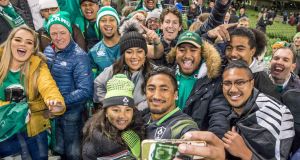 Bundee Aki takes a picture with his daughter Adrianna Aki and family members after the match. Photograph: Morgan Treacy/Inpho

It was probably the most discussed debut of any Irish player. The path of Bundee Aki to his first cap arrived amid a hail of criticism over the residency rules that allowed him wear an Irish shirt after three years of living in the country.

The normal pressure for a first time at international level was ramped up in the sure knowledge that there would be people waiting to knock the decision if he underperformed.

As it was, Joe Schmidt came out afterward the match and described Aki as “superb”. His work in defence and the way he set the tone for Ireland with a huge tackle in the opening minute on South African prop Coenie Oosthuizen defined Aki’s opening chapter with Ireland.

Captain Rory Best called the Aki tackle an entry point into the game. It was typical Aki, abrasive, direct and fully committed to what he was doing.

It was unfortunate that Oosthuizen had to leave the pitch injured but if there was any metaphor for Ireland’s soaring performance and a record winning margin, the opening Aki tackle was it.

It was not a game in which he had many offensive opportunities. The first time the inside centre got the ball in hand, in space and in an attacking position was the 58th minute and in that instance he spun it wide.

It was his defensive role that really stood up, with Jesse Kriel going down three times and even Bok captain Eben Etzebeth feeling the hitting power of the Connacht player.

56 seconds: Aki’s first act in an Irish shirt. Oosthuizen is held up and Aki makes the crunching tackle. The South African goes down and is forced out of the game.

5 mins: Picks up and scrambles forward through South Africa bodies.

22 mins: Following a series of scrums and a bout of kicking Aki hits a ruck and is swallowed up in Bok bodies.

24 mins: Spins a long pass right out to the waiting Andrew Conway, who makes ground on the wing.

32 mins: Stops South African captain Eben Etzebeth in his tracks as the Boks press forward, then tackles him a second time as they recycle and continue their attack.

34 mins. Aki scrambles left to block right wing Dillyn Leyds and moments later hits a ruck on the other side of the pitch.

40 mins: Takes a close ball from Johnny Sexton and gets knocked back by three South African bodies.

40+ mins: Aki smashes into Boks defensive line but gets no change at all out of it.

49 mins: Super tackle on Bok centre Jesse Kriel. Aki sprints across to his right and wraps up Kriel before swinging his body along the ground and putting his legs into touch. He gets a high five from teammates.

52 mins: Bangs straight into number 8 Francois Louw coming up and knocks the ball out of his control.

54 mins: Another aggressive tackle on Kriel and Ireland earn a penalty from the afters.

58 mins: Gets his first chance to make an offensive run in some space with the Bok defence back peddling but spins the ball along the line to Conway on the right to make ground and win a lineout.

65 mins: Another wrap up tackle 10 metres from the touchline.

69 mins: Aki takes down Jesse Kriel for the third time in a one on one.

77 mins: Takes a Bok kick deep in the Ireland half and barrels forwards into a slew of bodies. Two more defensive tackles and the game closes.