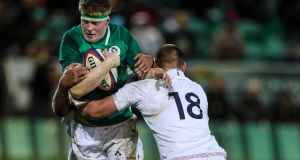 The Ireland Under-20 team may get an opportunity to try and close out a second successive Grand Slam in October. Unbeaten after three matches, games against Italy (home) and France (away) were postponed due to the Coronavirus pandemic but talks are ongoing to complete the tournament.

Irish 20s coach Noel McNamara explained: “We are still hopeful that the games will be replayed and there are tentative talks of that happening towards the end of October. Once that is confirmed it would be great to get the group back together.

“It would definitely be very exciting for that group of players to come back and get an opportunity to play together again and to represent Ireland at that level. That is a little bit off in the distance.”

McNamara, who is Leinster’s academy manager, was speaking during a briefing on the intake of seven new players, the majority of whom played for the Irish 20s this season and include former Dublin minor and Kilmacud Crokes footballer Niall Comerford (UCD), who was injured and missed the campaign, and Andrew Smith (Clontarf) and Seán O’Brien (UCD), standout performers during the tournament.

Joe McCarthy (Dublin University), a year young for the age grade, enjoyed some exceptional cameos off the bench, so too former St Gerard’s pupil Max O’Reilly (Dublin University) and Alex Soroka (Clontarf). Hooker John McKee (Old Belvedere), who played prop while at Methody school in Belfast before moving to Dublin and joining the Leinster academy where he converted to hooker, is in his second year at Irish 20s.