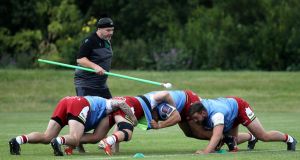 Saracens, Harlequins, Northampton and Worcester are among the clubs with confirmed cases of coronavirus following Premiership Rugby’s first round of testing. PRL announced that of the 804 tests, six players and four members of staff have yielded positive results, bringing into sharp focus the main threat to the resumption of the season in mid-August.

The identities of the individuals infected have been kept confidential but Harlequins and Northampton have both confirmed one positive test each, while Saracens have had at least one. It is understood that two members of Worcester’s staff have tested positive but there are no cases at Bristol, nor among the Sale squad.

PRL considers the results a success and within its expected range, but the 1.2 per cent infection rate is higher than any of the 13 rounds of testing carried out in football for the restart of the Premier League. The first round of Premier League testing saw six positive results from 740 tests.

The 12 Premiership clubs this week returned to stage two of testing – which allows for contact training including scrummaging, mauling and tackling drills. But it is understood that they did not begin until the results of Monday’s testing were known.

The 10 individuals to test positive – who have not been named – will now isolate along with their close contacts, but Premiership Rugby faces an anxious wait to learn the results of the second round of testing next week, after contact training has been in full swing.

The England and Leicester scrum-half Ben Youngs, who said he was unaware of any positive tests at Leicester, said: “It would probably be naive to think that out of 800 tests you are not going to get a few [positives]. The important thing is what happens next, because you don’t want that 10, next week, to be 30 and then 80.”

“The most important thing is that rugby does need to get back up and running. The clubs need it, everyone needs it. We need that to be as diligent as possible across all the clubs. Hopefully people will follow protocols to make sure it doesn’t get larger than that.”

Players have been training in groups so far but their close contacts will be determined on an individual basis, using video footage of all sessions and the monitoring of their GPS movements. No timeframe has been set on when the six players or four members of staff can resume – that, too, will be done on an individual basis, taking into account things such as whether or not they are symptomatic.

Meanwhile, Youngs has tipped Manu Tuilagi to make next year’s British & Irish Lions tour despite the acrimonious end to his Leicester career. Youngs confirmed that Tuilagi has played his last match for the Tigers after refusing to accept a pay cut and while the scrum-half does not believe the Rugby Football Union should bend its rules to make the centre eligible for England if he goes abroad, the centre has been tipped to tour South Africa next summer.

“Manu is an unbelievable, exceptional talent,” added Youngs. “I’m sure he’s got every opportunity of making that tour whether he’s playing in England or not. Do I feel let down by Manu? Absolutely not. He has given a huge career to Leicester and his family has been a dynasty. There comes a time in anyone’s career when you change it up.”

Youngs also believes a reduction in England players’ £25,000 match fees is inevitable after the RFU announced plans to make 139 redundancies. He said: “There’s no doubt it’ll be amended and changed,” he said. “I’d be very surprised if it wasn’t the case.” - Guardian