Matt Williams: Momentum is king when it comes to Ireland’s World Cup ambitions 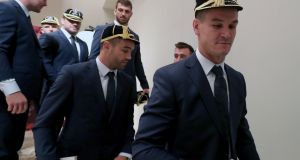 Johnny Sexton and Conor Murray at the World Cup welcome ceremony in Chiba. It is time for the iconic Irish players to deliver. Photograph: Dan Sheridan/Inpho

The veteran Wallaby centre Adam Ashley-Cooper is attending his fourth RWC. When he spoke to the media this week he displayed all his wisdom in succinctly describing how to win the William Webb Ellis Trophy.

“We have to win seven in a row, to win a Rugby World Cup. I think we have to focus on building momentum and building on each performance, getting better each game and saving our best for last. That’ll put us in the best shape possible to win a RWC.”

His sage words should be heeded.

In tournaments momentum is king.

The World Cup is unique in rugby. All the teams, in one location for two months in an environment that creates a level playing field.

Every team will experience the negatives of being away from home, stuck in a hotel, possibly with a “roomy” who snores, farts and leaves his dirty training kit on your side of the room.

Believe me, it’s not glamorous.

The key to success is to collect energy along the journey. You can tell as many jokes as you want and have 20 team awards aimed at creating a positive environment, but if you are not winning games, you will physically see the energy draining away from the campaign.

Winning injects enthusiasm and positivity into the group dynamics. Conversely defeat, or even winning with a poor performance, saps away the energy and the collective purpose of groups.

Just ask the Irish players from the 2007 RWC. They were a team full of quality athletes and wonderful men. They gave their all for the green jersey, only to see their dreams and efforts impossibly recede away like an out going tide. They lost their momentum. To this day those players cannot explain why such a high quality team could not perform.

That is why a powerful Irish performance against Scotland in their opening match is vital. Momentum must be earned by winning well.

A scraping disjointed win will not provide the energy to kick start the misfiring engine inside this Irish team.

Right now the doubts from the last Six Nations and the bashing at Twickenham a few weeks ago are weighing down a talented Irish team.

All that can change with one strong 80-minute performance. Scoring points gives teams energy and energy builds momentum.

Call it mojo, vibe or good old fashioned team spirit, there is no substitute for scoring more points than your opposition.

Scotland are not going to make this task easy for Ireland. For the first time in decades, they have talent right across their backline. Finn Russell is a gifted free spirit, who trusts his instincts and has the skills to put into actions those gut feelings, creating some spectacular rugby.

The return of Stuart Hogg at fullback provides the Scots with an extra attacking playmaker. This gives Scotland the possibility of using the same attacking structure as Australia and New Zealand. They use Curtly Beale and Beauden Barrett, at fullback as “wide outhalves.” Hogg is highly capable of creating havoc in any wide defensive system.

The ancient rugby truism states that “Tests are won by the forwards, the backs just score the points.” If it is true (and it is) then Ireland have a significant advantage.

With the notable exception of the Scottish captain, Stuart Mc Inally, who has an exceptionally high work rate and an excellent breakdown technique, the Scottish props and locks are not carrying the ball, clearing enough rucks or making enough tackles.

Cian Healy, Tadhg Furlong, Iain Henderson, James Ryan, Dave Kilcoyne,  Andrew Porter and Tadhg Beirne are all high work-rate players. If Ireland are to win, the Irish tight five will have to end the game with numbers significantly higher than their Scottish counterparts.

With Dev Toner watching from the couch, the responsibility to call the lineouts will go to Iain Henderson. He has a tendency to over-call himself early in matches. I see this as him wanting to show leadership and take responsibility, which are all admirable qualities. However, if I know he will call himself early, then you can be sure Scotland do as well. Henderson needs to be selfless and simply call the throw to where the Irish lineout can create and attack the space to win possession.

The Irish forwards power must create a platform that brings Sexton and Murray into the match. When a nine and 10 have good match you can be sure that their forwards have dominated their opposition pack.

Sexton and Murray are iconic Irish players but they are not been at their best. That must change against Scotland. The time for excuses is over. The two champions must deliver.

Equally for Scotland, Greg Laidlaw has been an outstanding player in blue for many years, however he has become tediously slow clearing the ball from the Scottish breakdown. Ireland must capitalise on this and use the Kiwi tactics of heavily contesting every tackle and ruck. Scotland want to play LQB – lightning quick ball – so don’t let them. Slow Laidlaw down even more, (if that’s possible) with counter-rucking to give the Irish defence ample time to organise and rush.

The men in green have a significant advantage over the Scots in the work rate of their tight five. This should be enough to gain a much needed injection of energy and ignite some Irish world cup momentum.