Addressing the media in Chiba, Ireland head coach Joe Schmidt has stressed that he expects Japan to be a tough opponent at the World Cup, with Ireland set to face the Cherry Blossoms six days after playing Scotland. Video: Reuters 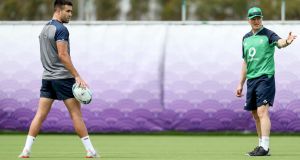 The wisdom in World Rugby’s decision to begin a World Cup in Japan’s rainy September climate will become apparent this weekend. The Irish squad may have avoided the recent typhoons, but the long-range forecast for their Pool A opener against Scotland in Yokohama on Sunday is for torrential rain.

The weather was noticeably warmer in the squad’s base in Chiba, where they had their second day’s training on Sunday.

“I see the temperature is due to be 32 degrees tomorrow,” observed Irish head coach Joe Schmidt. “That’s not really Irish temperatures so that will be a challenge for us in itself.

“We’ll see how we adapt and cope with those different conditions. The forecast for Sunday is torrential rain so we’re going to have to be ready for whatever conditions there are on the day.”

The changeable weather is another fly in Schmidt’s ointment, although of course it will be the same for Gregor Townsend and both teams. The general feeling may well be that if the forecast holds true, that will more likely favour Ireland.

Nonetheless, it would be a disappointment that after all the years of planning and the build-up, such a huge game would be played in a downpour, with all the potential consequences for the game as a spectacle.

Ireland’s midfield jinx (maybe make that a curse) having hit yet again with the hamstrung Robbie Henshaw, there was better news with Joey Carbery seemingly set to be on the bench, albeit Keith Earls remains a doubt after suffering a bang on his quad against Wales.

“We probably won’t select for Scotland until Wednesday, that will give us enough time to get some training done. Joey Carbery trained well on Saturday and he’s due to train fully with the team on Monday. Keith will either train Wednesday or Friday, so he’s close as well. It means that apart from Robbie, we’re hopefully not too badly off.”

Schmidt and the Irish think-tank opted for a six-day stopover in the Chiba prefecture about 40km outside of Tokyo before moving on to Yokohama on Wednesday. He appears happy with the choice save for one caveat, the traffic, which even on a Saturday morning meant a slow crawl from the airport for more than an hour.

“The training facilities are superb. They’ve done a great job and the quality of the pitch surface, the actual temporary gym they’ve put up is fit for purpose. So no complaints there,” he said.

“It took us 45 minutes to get to the training venue yesterday but, no matter where you are, that’s going to be part of the equation. It means you make maximum use of those training windows because it is a little bit of a strenuous journey to get to them.

“We came here because we thought we’d be a little bit out of the way. We like the fact it was quite open and it was an opportunity to sort of transition a little bit before we go right into the heart of where the games are going to be played in Yokohama.”

Perhaps peeved by Henshaw’s injury, and that new of it leaked out, or the long bus journeys to and from training, or the inclement weather forecast, or anything else this intensely driven coach cannot control, there’s no doubt this is one of the biggest weeks in his 6½ year tenure.

Lest we forget, expectation levels have grown inordinately in his time at the helm, and this applies within as well as outside the squad’s environs.

“We know we’ve been less consistent this year, but a lot of what we’ve been targeting is in the coming weeks. So that’s really where we know we’ll judge ourselves, and others will judge us for this year.”

The long haul clearly hasn’t helped him shake off his heavy cold from the week of the last warm-up game against Wales.

Schmidt spent much of his birthday last Thursday in the air enroute from Dublin, so when asked how he spent it, the Irish head coach reflected ruefully: “Well he sits in a round tin can for about 14 hours, and arrives and is pretty tired at the end of it to be honest. It wasn’t much of a birthday, but hopefully there’s a few gifts that will arrive over the coming weeks.”