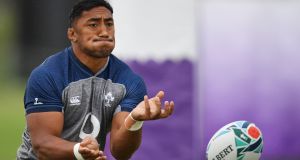 Can Ireland cope in the tram tracks? In October 2015, I was in Cardiff for Ireland’s Rugby World Cup quarter-final game against Argentina and have two memories from it: the Irish were obliterated by injury and Argentina had a skillset that totally exposed weakness.

Our pool fixture schedule solves the injury problem but I couldn’t help wonder, did bigger weaknesses exist? Would a stacked Irish team have struggled either way to cope with the extreme width and running game of Los Pumas? Well the beauty of rugby and Ireland being “figured” out is that knowledge of style is only relevant when it is not imposed on the opposition.

So regardless of Six Nations, Triple Crowns, Grand Slams success or otherwise during the four-year cycle, there’s one question that trumps all: can Ireland beat their opponent in the quarter-final? By Saturday evening we’ll know whether it’s South Africa or New Zealand. Without All Black prop Owen Franks, I fancy the Springboks to top their pool.

World Cup rugby is peculiar as Ireland’s jumping distance to the top is less steep. Ireland have excelled in the professional era, consistently improving year on year where we loiter on eight out of 10s with the odd blip (England) and the odd 10 out of 10. Our consistency is often our enemy where others like the hapless French plod awfully through successive Six Nations, but coming together for several months on RWC year they build a bond, a game and ambition to propel them way beyond their mean level.

Others follow suit. Japan for one have been stealthily charting their course. Jamie Joseph, their coach, stole the march on peeling away their top players and placing them into the Sunwolves reserves B team. So, he’s had his RWC effectively as a training squad for 12 months. When games are required he freed them up for the Sunwolves. This is extraordinarily clever, making Japan a far greater obstacle than our series thrashing three years ago; they scored 31 points against the All Blacks last November. More anon but you’re warned.

But where are Scotland? I coach kids and when I do so, I think of Scotland and their game. I adore watching them hunt for opportunity to such an extent, even when playing Ireland I want them to score spectacular tries; not to win but to validate their style. But alas, the inevitable error creeps in under the maximum of pressure and there’s no better side than possession-hungry Ireland to chip away looking for that error.

But, like Japan, Scotland can do damage to our ambitions. I wonder has Gregor Townsend tightened Scotland’s game to minimise mistakes without abandoning their natural attacking instincts? Having watched them in their warm-up games is it difficult to know how explosive they’ll be on the Irish tram tracks. But, unlike Argentina in 2015 can Ireland defend out there?

The answer for Ireland laid in the recent Welsh game. I was increasingly fascinated by the defensive width from both sides. Wales are continuing the hunger for tram tracks with skilled forwards waiting to probe for holes. On one occasion replacement hooker Ken Owens caught and passed like an outside centre. Clearly these are skills Wales have been prioritising.

But even with these subtle plays and skills, the Irish defence was rarely broken with Bundee Aki leading the way. Wider out, the Irish were much more comfortable defending the tram tracks. Big men like Jean Kleyn lent his bulk on occasions adding the classic double team smashing the Welsh carrier. Denying Scotland the ball is the first defensive method, slowing their recycle another aiding early defensive setup. But forcing offensive hits on the Scottish offloading player may afford Ireland’s greatest method.

But defensive problems only arise for Ireland where the breakdown recycle is too quick for the Irish defensive reset and here is where Argentina 2015 (Wales and Scotland) have the skillset to get the ball wider to expose the Irish line. Here is where Scotland have traditionally challenged Ireland with players like Stuart Hogg causing all sorts of problems. Wales elect to keep fatties wide out adding their skills but for Scotland it is their thoroughbreds and Hogg is their beast – so deny him quick recycle ball at all costs.

Ireland’s 31-man squad has the ability to tackle both South Africa or New Zealand. With players like Rhys Ruddock a nod towards the Springboks but the draw gives us a great chance.

There are two key differentials for Joe Schmidt this RWC rotation. The first is the player base and gameplan with both evolving. Secondly, the tournament timetable has given Ireland a huge chance with two massive games against Scotland and Japan over six days followed by a 14-day match break for the stars as the Irish Bs will take on Russia before a blended side-tackle Samoa in the final pool game.

In essence there will be no heroics required by the stars for three full weeks till we play the quarter-final. Yes, there will be injuries but Ireland should be in rude health come the quarter-final, leaving the gameplan as the only concern. That’s a subject for later but Ireland have more than enough to challenge any team, making the semi-final appearance a 50/50 outcome should they get over Scotland and Japan.

1 Nicholas Quinn: ‘Swimming became how I dealt with grief’
2 A beautiful, happy accident - Moneyball is the best sports movie ever
3 Reality Bites – Tales from the new normal: Caitríona Cormican
4 Ian O’Riordan: The aloneness of the long-distance rider
5 James McClean still failing to learn his own online history lesson
Real news has value SUBSCRIBE