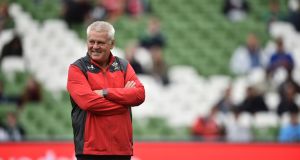 Warren Gatland: “When they play that way . . . in the past when we have success against Ireland, I said come off really hard at those one off runners, stop them winning those collisions and keeping your discipline so that they don’t get an opportunity.“

Trying to read Warren Gatland. Wales lose but Warren seems okay about it. Then again. A few things were disappointing for Wales, the scoreline, the discipline.

But Warren is as Warren says and that was that Ireland played to type. They fell back into a tried and trusted formula with Conor Murray delivering to hard runners, mainly Bundee Aki, over and over again.

That it worked for Ireland was a moot point. But a defeated Warren didn’t look so crest fallen. He seemed to be looking at a bigger picture.

“In the past when we’ve been successful against Ireland, it is making sure that when they play that way you have got to be a bit more collision dominant in that area and your discipline has to be good.

“There were areas of the game that were a bit disappointing for us,” he added. “Pleased our set piece and scrum and lineout was good and was pleased at how positive we were in that first half. We just didn’t have enough territory and possession in the second half.”

The suggestion seemed to be that confronting the one dimensional style of Ireland would be a straight fix for Wales if they meet at any stage in the World Cup, although Gatland also maintained that Wales have held back some aspects of their play for the coming months.

Maybe Schmidt is doing the same thing, or maybe Gatland’s hint that Ireland lack ambition in the back line is accurate.

“It’s been effective for them,” reiterated the Welsh coach. “When they play that way . . . in the past when we have success against Ireland, I said come off really hard at those one off runners, stop them winning those collisions and keeping your discipline so that they don’t get an opportunity.

“They just played phase, after phase after phase, see if they can get a penalty chance, kick the ball down the field and then try and squeeze you in your 22. When we have been effective against Ireland, when we have won matches it is because our discipline has been good and we stopped that collision dominance off nine.”

The unspoken words were whether Ireland has the capacity to play an expansive style of game against some of the best sides in Japan, or if Schmidt is even thinking of trying to get the team to play that way. Effective seems more likely the Schmidt way.

“They were good in that (off nine) area but they didn’t play any expansive ball at all that troubled us out wide,” added Gatland before moving to a more positive point. “When they play that way and are effective, they are difficult to stop.”