Rugby World Cup: The stage is set for the Brave Blossoms to deliver 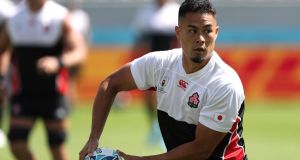 Japan player Yu Tamura in training ahead of the opening game of the Rugby World Cup against Russia at Tokyo Stadium. Photograph: Stu Forster/Getty Images

It will take something exceptional to compete with the dazzling Friday night lights of Tokyo, but after a century of flickering existence in Japan this is rugby’s night to shine.

The Brave Blossoms play Russia on Friday at 7.45pm local time in the opening game of the World Cup, and the pressure on the hosts has been heavier than the humidity. They simply cannot lose this.

If all politics is local, then this big, sprawling, slow-burning tournament will also have a distinctly and familiar Irish streak running through the showpiece occasion. Luke Thompson, the veteran lock who has already played in two World Cups for Japan, is named in the replacements and is the oldest player in the tournament at 38. His varied rugby life includes a few years with Blackrock after he came to Dublin on a schools’ exchange programme .

Both men were on the field on Thursday on a day of gorgeous sunshine for the eve-of-match run-out in Tokyo stadium, a big, low-cut bowl in the Chofu suburb of the city. However, any reminisces they may wish to share about Dublin will have to wait until after the game.

It’s hard to gauge the awareness levels about this tournament among the nine-plus million people in the city. The sport’s tradition here is rich, with the Yokohama club formalising its existence as early as 1866, and rugby becoming a mini-fad during the 1920s. Yet since then it has to settle for outsider status in Japanese passions for baseball, sumo and soccer.

The hosts have been planning for this tournament for a decade, and the players spoke gravely about the opportunity and pressure to make the most of having the elite rugby countries of the world in their homeland throughout the autumn.

“I have a great sense of responsibility,” Yutake Nagare, the starting scrumhalf, said solemnly before a room crowded with Japanese media.

“I know the team’s and the country’s expectation is there playing in the first game, and I want to play with responsibility. I believe I’ll be nervous, but I’ll try to communicate with as many players as I can and control the game by connecting them together.

“The feeling of the turf was the best we could have hoped for, and although I believe the atmosphere will be different tomorrow night, the best stage is awaiting us. I will be nervous. But this is a dream match.”

That sense of fantasy goes for both countries. Everyone remembers Japan’s most recent dream match, that fabulous 34-32 win over the Springboks in Brighton four years ago for the limitless adventure of the underdogs. Their task here is trickier: to keep Russia’s heavier and less mobile side chasing shadows while delivering the win that would increase local interest in both the team and the tournament.

“The players were here last year against the All Blacks, so there won’t be a problem with them being too nervous against Russia,” said Tony Brown, Japan’s assistant coach.

“It’s not an issue for us. We’re looking forward to the game, it’s going to be exciting, and an opportunity for us to play the way we want to play. I came to Japan at the same time as Luke, and we played in the same team for two years, and that was in 2004, so he has definitely been playing a long time now. When he first came here he was a country boy from Canterbury. He’s a tough guy who wants to perform every week. He trains hard, and he’s actually a really important player for us, mentally tough.”

That November Test against New Zealand was, as expected, a romping 69-31 win for the visitors. Yet Japan enthralled their crowd by producing five tries of their own, including a fourth-minute charge down on a Jordi Barrett kick which gave them a memorable if short-lived lead. In a way that performance illustrated just how far Japan have advanced since the infamous 80 minutes at the 1995 World Cup, when New Zealand ran in 21 tries on their way to a 145-17 win.

The worst of it was that the All Blacks had rested a host of starters. That horrific experience could have convinced the Japanese trying to progress in the sport was futile, but over the last decade the Blossoms have begun to compete.

The 41-7 defeat to South Africa earlier this month reinforced the truth that Japan will always be up against it when it comes to pack weight and pure muscle mass, but the performance of Yu Tamura, the host’s experienced outhalf, was the subject of concern afterwards.

“South Africa are quite a good team,” Brown said levelly. “So it’s tough to assess Yu Tamura’s performance against South Africa. He’s really important to us, one of our leaders on our team, and when our team plays well Yu Tamura plays well. When we put in a really good performance as a team he’s able to control the game, and everything falls into place from there.

“I don’t think we ever attack in the same way twice. It’s what we’ve always done in Japan and other teams I’ve coached, I’ve always had new attacking options for each opposition. Russia’s no different, and Ireland will be no different next week.”

The task for the Russians is simple – to spoil the Friday night mood in Tokyo. When the teams last met in Japan, nine years ago, nobody cared. A crowd of 6,000 people showed up. Japan have bossed their meetings historically, but this game carries with it a rare pressure to deliver under the intense spotlight of world rugby. The Russians are there to provide the traditional Hollywood cliché role: a foe to be beaten.

“We don’t get much exposure in Russia,” said Artemyev at his captain’s appearance. “We watched the last four or five games of Japan. They have a very structured, organised game. We need to bring chaos into their organisation. There is huge anticipation of the game against a team that is hugely motivated. We also hope we will get some support from the Japanese crowd.”

Fat chance of that. But either way, someone with a Blackrock grounding will begin the World Cup on a bright note.