Ireland don’t have to silence the crowd, but they need to be wary of Antoine Dupont 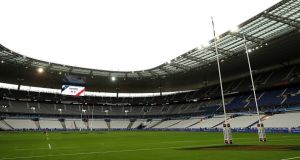 The magnificent Stade de France will be empty on Saturday night. No brass bands beating out “Allez les Bleus.” No smuggled roosters will be liberated onto the hallowed turf and no cigar smoke. File photograph: Getty Images

Some days truly shine with the excitement of possibility. For the Irish National team, today is one of those beautiful days.

The opportunity to win in Paris, with the Six Nations Championship up for grabs, is a privilege that any player would envy.

That does not mean it will be easy. In fact, it’s going to be one of the toughest days in these Irish players’ careers but true competitors crave the hard days. Like all things in life, the harder we work at attaining what others deem impossible, the more joy we take when the impossible is accomplished. As Muhammad Ali said: “Impossible is nothing.”

Ali also said: “If your dreams don’t scare you, they aren’t big enough.” A big defeat in Paris will scare the pants off the strongest of players.

The driving motivation for Ireland to overcome this fear is that they understand, when your name is engraved on to the Six Nations Trophy, it will be there forever. Only time’s forgetfulness can fade its relevance.

All away wins have their foundation in defence. Every point Ireland can stop is another added to their points differential

In sport there is nothing better than taking on an opponent who everyone else believes is better than you, then justifying yourself to the universe by winning. That is why today is so very special for Ireland. This type of opportunity presents itself to very few rugby players. This Irish team have been given a rare gift.

Then again, there is nothing worse than being an underdog and getting your face ground into the French mud. That is the athlete’s dilemma. By competing you risk the pain of defeat. By not competing you deny yourself the euphoria of winning.

Today’s stage is the magnificent Stade de France. It is as unique as the French culture.

On the team bus travelling to the Stadium, there is a tunnel, several hundred meters long, that brings the team to their changing rooms. As the team bus enters this tunnel it departs the real world. Brief moments later the players arrive at the surreal subterranean entrance, to a world where the laws of civil society do not apply.

In this world the players can only rely on their own courage and that of the men wearing the same coloured jersey. Usually, a long corridor that snakes through the bowels of the grandstand will deliver the players to the sensory overloading, jam packed French coliseum.

Except today it will be empty. No brass bands beating out “Allez les Bleus.” No smuggled roosters will be liberated onto the hallowed turf and no cigar smoke will waft over the passionate 70 000 voice choir, who usually belt out the Marseillaise.

Before a blow has been struck, Ireland will have silenced the crowd. That is a huge bonus. To maximise this advantage, Ireland must sprint out of the blocks and start the scoreboard ticking over. Points will put pressure on the French.

Ultimately, all away wins have their foundation in defence. Every point Ireland can stop is another added to their points differential, which will be crucial in determining who lifts the trophy tonight.

Antoine Dupont is the best scrumhalf in Europe. His rare talents are not limited to his ability to strike faster than a brown snake from the base of the rucks, or his creative running lines that see him score tries from supporting the line breaks of his outside backs. Because of his exceptional running game, his beautifully weighted passes are often undervalued.

His brilliant passes encourage his forwards to run onto the ball at pace, from all sorts of creative angles. Dupont’s passes enhance the French forwards’ running game which creates the space for their creative backs.

Ireland’s primary defensive mission is to stop these French forwards from dominating the gain line. If Ireland fails at this mission, then the likes of Romain Ntamack, Virimi Vakatawa and Gaël Fickou will be impossible to contain.

Last week we saw a major change in Ireland’s kicking game. Conor Murray’s much criticised box kicking all but disappeared. Jonny Sexton and Jacob Stockdale did the kicking to exit Ireland’s half. This was not a one off strategy for Italy.

Shaun Edwards, the French defensive coach, creates defensive systems that pressurise the box kicker, while leaving four players in the backfield to catch the high ball and counter attack. Sexton and Stockdale will kick to touch and deny the French their much loved counter attack.

While this is a smart tactic, Ireland will need many more.

Ireland must bring courage, bravery and a rare level of physical commitment to Paris, but that will all be for nothing without superior tactics.

The French coach Fabien Galthié has reinvigorated his national team to once again play exciting running rugby. The French definitely have more natural talent than Ireland but they are inexperienced. As we witnessed in their defeat at Murrayfield, pressure can affect them.

In Paris, with the trophy within touching distance, the world believes the French should win. This expectation creates pressure. Ireland must be the beast that looks into the French eyes and places the fear of failure, at the centre of their thoughts.

Today we will see if Andy Farrell has what it takes as a head coach. He must create a match plan that will heap pressure on this callow French team. If he does, then their youth might buckle.

Anything less than a powerful, strategically excellent performance from Ireland will be punished by the creativity of Galthié and his young French team.