Gael Fickou shifted to the wing as France name their XV 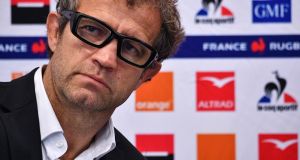 Gael Fickou will be shifted from centre to the wing to make up for the absence of the injured Teddy Thomas as France look to win the Six Nations for the first time in 10 years when they take on Ireland on Saturday.

Fickou is replaced by Arthur Vincent at centre in an otherwise unchanged team after Les Bleus beat Wales 38-21 in a friendly international last Saturday.

France are third in the table on 13 points, behind England on points difference with Ireland on top with 14 points. England travel to Italy earlier on Saturday.

“The message to the players was simple: we have the same chances to win the Six Nations as Ireland and England,” team manager Raphael Ibanez told a news conference.

Coach Fabien Galthie insisted that Les Bleus needed to show consistency as their ultimate goal is to win the World Cup on home soil in 2023.

Against Wales, France were penalised 16 times, but Galthie said it was the result of his players being aggressive during a promising attacking display at the Stade de France.

The game against Ireland was rescheduled amid the first wave of Covid-19 lockdowns, and it was confirmed for Saturday after French sports minister Roxana Maracineanu said elite sports could continue despite new lockdown measures announced by president Emmanuel Macron on Wednesday.