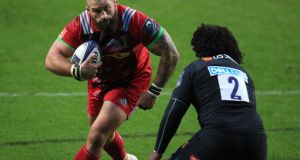 England captain Dylan Hartley has been cleared to play in the autumn international series but prop Joe Marler will be suspended for two of the three matches.

An independent disciplinary panel decided Hartley, who pleaded not guilty, should receive no further sanction after being sent to the sin-bin for striking Clermont prop Rabah Slimani during Northampton’s 24-7 Champions Cup defeat on Saturday.

But England coach Eddie Jones will be without Marler for next month’s matches against Argentina and Australia after the Harlequins front-rower pleaded guilty to striking Wasps’ Will Rowlands with his forearm during his side’s Champions Cup defeat in Coventry.

“It was found Hartley had committed a reckless act of foul play in that he had struck Slimani in the face. However, the committee was not satisfied that the offence had warranted a red card,” read a statement issued by tournament organisers European Professional Club Rugby.

The entry-point sanction for striking with the hand is a two-week ban, rising to eight weeks and above according to severity.

Although the offence was deemed minor, Hartley’s dismal disciplinary record that has robbed him of 60 weeks of his career threatened to increase any sanction given and prevent him from captaining England next month.

Argentina, Australia and Samoa visit Twickenham on successive weekends and while the Northampton hooker is under pressure from Jamie George for his place in the front row, he is set to be retained in the role he has performed throughout Eddie Jones’ reign.

Marler will miss both the Argentina and Australia matches after being suspended for three weeks, but will be available for the final match of the series against Samoa.

He pleaded guilty to striking Rowlands with his forearm, which earned him a red card on Saturday.

“The committee upheld the citing complaint and determined that the offence had warranted a red card, but decided after consideration that the strike by the player was with the arm rather than the elbow,” EPRC said.

“In deciding that Marler is suspended until midnight on Sunday, November 19th, the Committee took into account the player’s likely playing commitments in the coming weeks. Both Marler and EPCR have the right to appeal the decision.”