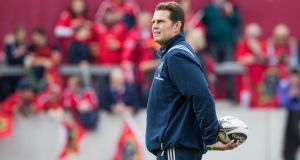 Munster Director of Rugby Rassie Erasmus: “I must take half of the blame because we didn’t talk too much sense at half-time.” Photograph: Morgan Treacy/Inpho.

Searching for a contemporary reference point for Saturday’s Guinness Pro12 final between Munster and Scarlets at the Aviva Stadium (6.15) the most recent meeting between the teams seems an appropriate starting point.

It took place in late February at Thomond Park. The home side led 21-6 at half-time but three tries in a six-minute spell allowed the Scarlets to forge a remarkable 30-21 victory. The Welsh club’s accelerated scoring prowess was very much in evidence again last weekend in their semi-final victory over Leinster at the RDS.

Munster’s Director of Rugby Rassie Erasmus and his assistant Jacques Nienaber have enjoyed a hugely positive influence in emotive circumstances this season. They’ve empowered Jerry Flannery and Felix Jones in their respective coaching roles and encouraged the players, all 51 of them in the present campaign, to play without fear.

It’s okay to make a mistake, okay to try things. It’s a culture that propelled them to the Champions Cup semi-final and with another chance to win a trophy at the weekend. Erasmus is also prepared to shield his players, not least when he believes that the error belongs to him.

That Scarlets match was one such occasion: “When we were 21-6 up I must take half of the blame because we didn’t talk too much sense at half-time. I wouldn’t say arrogance, but when you’re 21-6 up, sometimes you say the stupidest things where you have seen what you did right and did wrong in the first half; everybody makes mistakes and we said some wrong things at half-time at 21-6.

“That wind that we played with in the first half was much stronger than the 21-6 we were up. We had actually to change our tactics, which we didn’t, which was obviously half our fault. You must say the right things at half-time. It was just stupid things I said, it’s not the end of the world.”

Erasmus pointed out that it wasn’t as if Munster didn’t have chances after the Scarlets scoring spree. “We really got back into it, got into scoring positions. It wasn’t as if we got all stuck, ‘what are we going to do next,’ they just really defended well and turned us over at the breakdown really well.

“As I said a few times it is only the Cardiff and the Leinster away game that’s been embarrassing in a sense that we didn’t try to find a way (back into the game). In that specific game we did find ways, we just couldn’t finish it.”

The South African admitted that the Munster players did learn several things from their Champions Cup semi-final defeat to Saracens and they brought them to bear against the Ospreys at Thomond Park last weekend.

Not least of which is “big moments turn playoff matches” and that a team can win or lose belief in the time it takes to click your fingers. He shares a view expressed by other coaches that while European glory is the most prized commodity, winning a domestic league rewards consistent excellence.

“The Pro12, for me, is the competition the season ticket holders pay for, you have to be consistent for all year. You lose players to internationals, injuries, it’s a long season of 22 matches and you play different styles, a Welsh team and then an Italian team.

“It’s such an interesting competition, so when you get to a final the trick is to understand totally how the opposition is playing. Because one week it’s Treviso, then Ulster, then Ospreys . . . comparing what we faced against Ospreys (in the semi-final) to this week, it’s a totally different style.

“If this final was (against) Ospreys, we would have tackled – not physically – the week totally different. Scarlets are a complete team. I think, because they’ve played Saracens twice, teams learn a lot after you play Saracens.”

There must be a temptation to erect a buffer should next Saturday culminate in defeat; based on where Munster were last year and Anthony Foley’s passing, but Erasmus wasn’t interested in a softer landing based on the result.

“I’d be lying if I said to you that even if we lose, it has been a great season. It probably was an okay season. It would be a wonderful season if we won it.”