Lions 2017: The Super Rugby sides waiting for a crack at the tourists 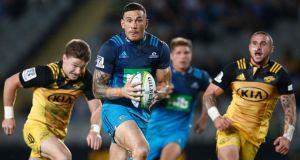 Sonny Bill Williams in action for the Blues, the Lions’ second opponents of the tour. Photograph: Phil Walter/Getty

This summer’s British & Irish Lions tour has been widely acknowledged as arguably the toughest the tourists have ever embarked upon.

Playing the All Blacks in their own back yard is never an easy task, but Steve Hansen’s current crop are one of the most formidable sides in Test match history.

Three fixtures against the back-to-back world champions alone would be hard enough, but before they get a crack at New Zealand the Lions must negotiate six potentially gruelling warm-up games, with another sandwiched between the first and second Tests.

Warren Gatland’s side first run out against the New Zealand Barbarians on June 3rd, before coming up against all five of the nation’s Super Rugby sides - as well as the New Zealand Maori.

In 2005 Clive Woodward’s tourists won all seven of their midweek fixtures against local sides - but they played against the National Provincial Championship versions of teams, rather than the Super Rugby franchises who lie in wait this summer.

Midweek games are vital for players to gel and stay match-fit, and for combinations to be tried and tested - all while trying to emerge unscathed as the opposition look to soften up key players ahead of the main event.

And this time round the warm-up games - with the term warm-up used very loosely - look particularly daunting given the current form of New Zealand’s Super Rugby teams.

The five New Zealand sides - The Highlanders, Blues, Chiefs, Crusaders and Hurricans - are dominating this year’s competition, and are strides ahead of their Australian, South African, Argentinian and Japanese rivals.

Indeed, as of the tournament’s 12th week, the New Zealand franchises had won 33 out of 34 fixtures against sides from other countries, with the Chiefs’ defeat to the Stormers the only blot on the copybook.

Added to this, all five teams will have access to their All Blacks for their games against the Lions, effectively making them mini-Tests.

This suggests Gatland’s 41-man squad is going to be tested to its limits in June and July, and while there will be no respite the need to keep intensity levels high throughout the tour may reap dividends.

Here are the five Super Rugby teams looking to land the first blows and ensure the All Blacks come up against wounded Lions.

The Lions’ first of three visits to Eden Park seems just as important to the All Black selectors because Sonny Bill Williams needs to regain form while Steve Luatua and the Ioane brothers (Akira and especially Rieko) are potentially bolters into the test XV due to concerns over Kieran Read and Ben Smith. Jerome Kaino is not expected to recover from surgery in time.

A ruthless machine, the Crusaders are unbeaten this season so victory would be a massive statement by the Lions.

v Lions: June 13th, Forsyth Barr Stadium, Dunedin
Coach: Tony Brown
Captain: Ash Dixon, Ben Smith
Current capped All Blacks: Nine
Notable players: Aaron Smith, Malakai Fekitoa, Waisake Naholo, Ben Smith
2017 Super Rugby record: P 11 W 8 L 3
What to expect: Coached by highly rated Tony Brown (Leinster and Connacht both sought his signature), who switches to Japan soon, this will be the penultimate pre-test test match. Aaron Smith is back to his magnificent best after off field troubles in 2016 - joined by Ben Smith, who must use this match as a tune-up, while Malakai Fekitoa will also seek to nail down the All Blacks 13 jersey. Same goes for Waisake Naholo on the right wing. At their best, unstoppable.

Still, Otere Black is a serious outhalf while Nehe Milner-Skudder could make a cameo on this Lions tour following a long injury lay off. Vince Aso and Ngani Laumape would be unknown to northern hemisphere folk but this centre pairing can destroy any defence.

New Zealand Provincial Barbarians (v Lions, June 3rd, Toll Stadium, Whangarei):
The soft opening, these Barbarians are primarily pulled from Mitre 10 and Heartland squads - usually as a means to develop 85kg or less players - but the addition of Bryn Gatland (assuming he’s not needed by the Auckland Blues) pits father against son in Whangarei, high up the north island. Jared Payne has previously represented the NZ Baabaas who change from their traditional red jerseys for this fixture.

Maori All Blacks (v Lions, June 17th, Rotorua International Stadium):
A guaranteed war. Multiple cracks in the Lions squad were revealed by this fixture in 2005. None of Steve Hansen’s squad will be on show as they face Samoa the night before in Auckland. Still, alá Carlos Spencer 12 years ago, expect to see some ageing kiwi heroes rolled out.

*All records correct as of May 15th