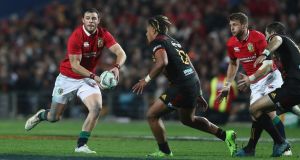 Robbie Henshaw in action during the Lions’s 34-6 victory over Chiefs at Waikato Stadium on June 20, 2017 in Hamilton, New Zealand. Photograph: David Rogers/Getty Images

Regrets, he may have a few, but overall when Robbie Henshaw reflects on his first Lions tour he regards it as one of the highlights of his career to date. Furthermore, having experienced one, at 24 he’s already earmarked the 2021 trek to South Africa as a major long-term goal.

Like others, Henshaw drew something of a short straw in being picked for the first midweek defeat to the Blues. Of that starting XV only Elliot Daly made the first Test team. Admittedly, Rhys Webb, Jack McGrath, Ken Owens and Maro Itoje were on the bench, with Itoje starting the second and third Tests, while CJ Stander and Jack Nowell also came off the bench in the third Test. But those picked for the Blues’ game were left playing catch-up.

Thereafter consigned to the midweek team, Henshaw’s defence was excellent but his attacking opportunities were limited. He remained at inside centre in the defeat to the Highlanders and win over the Chiefs before suffering his tour-ending shoulder injury 18 minutes into the draw with the Hurricanes.

If there was a silver lining, it was that the enforced 12-week lay-off embraced much of the off-season and he is on schedule to return next week for Friday’s game at home to Edinburgh. “Everything has gone according to plan. There’s been no setbacks or hiccups.”

Henshaw flew home on the day of the third Test, stopping off in Melbourne en route to see the last throes of the Lions’ win in Wellington.

“I arrived in Melbourne just at the 79th minute and got to see the last kick of the game. That was a good feeling on the way home, having been a bit down. To see the lads get the win in that second Test in horrific conditions was a nice way to head home.”

He describes watching the drawn decider a week later at home with his family as a mixed bag. “I didn’t know what was happening with that last penalty and what happened when it was blown up. I was nearly expecting extra-time, which would have been great.”

Still, he looks back on the tour as positively. “I thought it was class. I loved playing with different players and being under a different management structure, and I suppose a different game plan to how we usually play. It was a great learning curve for me, and it really made you as a person push yourself out there, and step up as a player and put yourself out there. It was definitely an enjoyable experience, and it was tough as well. The conditions we played in down there were tough and the opposition were pretty class as well.

“People ask how you feel about the drawn series and I think we held our own down there. We were unbelievably well prepared when we landed, and whatever we were hit with we were able to throw it back at them. We ticked off everything and we did unbelievably well.

“I think reflecting on it, it shows how well we were prepared and the challenges we dealt with. It could have been the kick of a ball that won the series, but I think the draw was pretty fair.”

Fast forwarding to next November, when Ireland host South Africa, Fiji and Argentina, it’s conceivable that Henshaw will have a new rival for the Irish jersey in Bundee Aki, or that they could renew their old Connacht midfield partnership given the long-term absence of Garry Ringrose.

“It’s a bit down the road, but listen, it’s great to have him in there. I know he was always kind of hemming and hawing about what he was going to do, and he was unsure, but I think he’s really settled now. It’ll be great to have him there because he is a world-class player and I think he’d add value to the group as well. I’m really looking forward to having him in and hopefully he gets a run out.

“His voice on the pitch is really good, as his knowledge of the game and his vision. He’s not just a straight line runner or a bash-it-up player, he’s well able to distribute and put guys into space. I suppose his off-loading game and his game of being able to pull something out of nothing, that’s where he’s most dangerous.”

In the meantime, there is the prospect of kick-starting his second season with Leinster, after a campaign in which they played some wonderful rugby, before it culminated in two semi-final defeats.

“That was the disappointment coming out of last year and we want to go one better. We’ve said that openly. We weren’t happy with last year at all, and we know there were a few moments in those semi-finals, particularly in France, when the game was there for us but just a couple of moments let us down.

“I think it’s great learning for us. We’re a relatively young squad and there’s a lot of young guys who will definitely benefit from that. Also, there was a little bit of drop-off last year coming off the back of the Six Nations. I think we peaked and had a really good game against Wasps in the quarter-finals, and then there could have been a small bit of drop-off or fatigue. I don’t know. We need to look at that as well as performance and see how can we go into this season and ensure that doesn’t happen.”