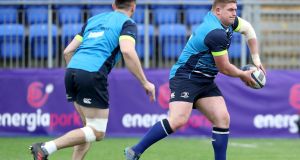 Tadhg Furlong has offloaded the ball more than any of his Leinster teammates. Photograph: Bryan Keane/Inpho

Drilling down into categories of comparison between Leinster and Scarlets ahead of Saturday’s Champions Cup semi-final at the Aviva stadium the bare figures tend to camouflage the minutiae that lies beneath the surface and offers a slightly different perspective.

Take for example the goal-kicking percentage where the Scarlets (88 per cent success-rate) appear to have an appreciable advantage over Leinster (79%).

What it doesn’t clarify is that those figures are collated across three place-kickers from the respective teams.

Scarlets’ fullback Leigh Halfpenny will be his side’s primary kicker on Saturday and boasts an 88 per cent success-rate on his own, landing 22 of 25 attempts, all 12 conversions and 10 out of 13 penalties.

Leinster’s Jonathan Sexton has 88.33 per cent accuracy with the placed ball, comprising of 15 from 18 kicks, eight from 10 conversions and seven from eight penalties.

However when Scarlets Dan Jones (92%) and Rhys Patchell (67%) are added to Halfpenny’s statistics it provides the composite goal-kicking number in the graphic while the method is the same in discerning the aggregate figures for Leinster captain Isa Nacewa (90%), Ross Byrne (62%) and Sexton.

The most accurate place-kicker – it’s based on those who have taken 18 or more kicks at goal – in the tournament is Racing 92 scrumhalf Maxime Machenaud (88.89%) while the man who will take responsibility for Munster in Bordeaux, Ian Keatley (82.35%), is ninth overall on a list where Halfpenny is third and Sexton seventh.

Leinster’s average of 3.6 tries scored is the highest in the tournament – marginally ahead of the Scarlets (3.0) – but beneath the headline figure it’s interesting to note the breakdown between backs and forwards.

Of the Irish province’s 25 tries in the tournament to date 15 have been scored by the backs – 11 from the centres and halfbacks with Sexton alone on a team best three tries – with the pack weighing in with 10.

The statistics for the Scarlets endorse the Welsh club’s reputation for playing an expansive brand of rugby with 19 of the 21 tries scored by their backs, with scrumhalf Gareth Davies a leading contributor with four.

To broaden out the comparison between the semi-finalists, Munster have scored 20 tries (11 backs, eight forwards and one penalty try) while Racing 92 have managed, 17, and unlike the other three teams the forwards lead the way in the try scoring stakes for the Parisian side with 10.

On the other side of the ball, Johan van Graan’s Munster have conceded the fewest tries – nine – of which five were scored by backs, and three by opposing fullbacks. Racing (11) are most susceptible to opposition wings (four). Leinster (13) have given up six tries of that tally to wingers, a statistic that won’t be lost on the Scarlets, who in turn have conceded 14 tries (five to wings).

The breakdown will be a crucial area at the Aviva on Saturday and in Kildare-born secondrow Tadhg Beirne the Scarlets boast the tournament’s turnover king with 16 and the next most proficient in this semi-final is openside flanker James Davies, a brother of Lions centre Jonathan. Robbie Henshaw has racked up the best number from a Leinster viewpoint with five.

So in examining the graphic and alighting on two categories, Leinster (9.6) concede on average fewer turnovers per match than the Scarlets (13.0) but the Welsh side (7.9) win more turnovers than their Irish hosts (6.3).

Statistically the Scarlets lineout (94%) is the best in the competition with the favoured recipients, Beirne (25) and flanker Aaron Shingler (23), but Devin Toner’s 31 wins, including three steals, offer the best figures on either team.

The potential availability of Jack Conan following injury means Leinster will have the player who has carried most ball (73-times in six matches) while other notable milestones include the fact that tighthead Tadhg Furlong (six) has off-loaded the ball more often than any of his teammates.

It’s instructive that the two Scarlets players with the most metres made – in most teams it is the fullback or a wing – are their midfield combination of Hadleigh Parkes and Scott Williams.

Finally, one statistic that Leinster will definitely want to positively adjust is the fact that they have lost three of four home semi-finals – Munster were the home side when Leinster won in Croke Park in 2009 – with their sole success coming against Toulouse in 2011.