Lansdowne and Clontarf hold ground at top of table 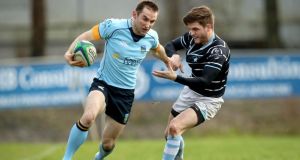 Garryowen and Terenure College were the only teams to climb up the Ulster Bank League Division 1A table over the weekend.

With current Ireland under-20 squad member Peadar Collins crossing in the 62nd minute, Garryowen climbed back into the top half of the table thanks to a gritty 17-16 victory over UCD at Dooradoyle.

Dublin University endured a seven-try 45-3 drubbing at the hands of Lansdowne on the Aviva Stadium’s back pitch.

Daniel McEvoy scored his 10th try of the campaign and Scott Deasy took his league tally to 142 points as Mike Ruddock’s men stretched their lead at the summit to seven points.

Number eight Michael Noone was Clontarf’s hat-trick hero as they continued their quest for back-to-back titles with a commanding 36-13 bonus point win at Old Belvedere who are now bottom of the table on scoring difference.

Lock Brian Hayes’s charge-down try and 11 points from the boot of Tomás Quinlan proved crucial for the Leesiders.

Bohane stung the visitors with a try under the posts in the very last play and teenage outhalf Alan Tynan added the all-important conversion.

Galwegians are hoping their hard-fought 20-7 triumph away to Ballynahinch is the turning point of the season after flanker Marc Kelly’s closing try helped them to end their three-match losing streak.

The Connacht side are now within two points of third-from-bottom Shannon who were stopped in their tracks by Dolphin in Cork.

David Corkery’s side did not play like they are sitting on the bottom rung of the table, as braces from backrowers Barry Fitzgerald and Ryan Murphy guided them to a 24-11 bonus-point win.

There were try doubles for Mark Rowley and David Poff as Old Wesley, who have moved back into the top four, produced their best display for some time in a 49-19 bonus point victory over Ballymena at Donnybrook.

UCC maintained their impressive 2017 form with a two-try 16-13 triumph over promotion-chasing Naas at the Mardyke, the key penalty coming in the 74th minute from the boot of winger Kevin O’Keeffe.